Want to read a classic book but not sure you have time for something long? Pick up one of these eight short classics, perfect for busy people everywhere. All of these short classic books are under 300 pages, so you can read one in a weekend!

Short Classics You Have Time to Read (and Should!)

Note from Elsie: I’m excited to welcome my friend Anjanette to the blog today! She loves to read, and offered to write a guest post here while I’m taking care of my new baby.(: Anjanette lives in Alaska, which is pretty awesome, and has written a cookbook! Pay her site a visit, and enjoy this post with her book recommendations for busy adults.

Reading has been my primary hobby since age four. I surpassed every school or library reading challenge by double or triple the suggested goal. One summer I nearly succeeded in reading every children’s chapter book on the shelves of our local library branch.

Yet, I’ve come to realize over the years that despite my prolific consumption, very few of the books I read could be considered “classics.”

I first noticed the consequences of this dearth of old books in my reading log while attending a private college-preparatory high school. I’d been at the top of my public school classes and read more than anyone else I knew, but my new private school friends were in a different league entirely. They referenced places and people I’d never heard of, and they all seemed to catch the significance of each reference without asking for clarification. It was like a secret language at times.

In college, my homeschooled acquaintances often missed pop-culture references, but by then it had become obvious that they, like my private school companions, had an edge on world history, politics, and really good writing. It also became obvious that these two groups of friends had more in common that just higher-than-average intelligence.

The more I followed their book recommendations, the more my eyes were opened to a treasure that I’d been blind to. “Old books” held a strikingly different beauty than the more contemporary titles I’d been nourished on. It was humbling to be the less-informed friend, and sometimes embarrassing to struggle with books others seemed to breeze through.

However, when I discovered the value of classic literature, I knew I needed to press on to reap the rewards I saw my friends enjoying. So, I came up with a strategy that has served me well: read the small books.

Life hasn’t slowed down since college, and my reading hours are limited and precious. I’ve tackled some epic novels in my adulthood, but I think I would have given up on classics if I only allowed myself to read heavy doorstopper literature. A quick classic exposes me to challenging vocabulary, fascinating people and places of times gone by, and gives me a key to culture I didn’t have before without exhausting me and driving me to reach only for twaddle.

Homeschooling my own four children has given me a second go at children’s classics, which have contributed to my rising fifth grader reading at tenth grade level and challenged me to stay ahead of him. Short classics written for adults have increased my confidence and given me a taste of the really sublime written works that have inspired modern writers.

And even though I now feel capable of comprehending and even enjoying longer classic works, I often choose short classics when I am trying out a new author. Life is short and my to-read list is long! I’d like to be able to say I’ve read Jane Austen, for instance, even if I never get around to Pride and Prejudice.

If you can relate, try finding a book under 200 pages for each classic writer you’re interested in. Here’s a list of some of my favorites to get you started:

1. The Old Man and the Sea by Ernest Hemingway

This was the very first adult classic I attempted. I chose it because it was a thin book and the man on the cover looked like my rugged great-grandfather who loved to fish. It unfolds like a vivid dream, slow and measured, and asks the reader to ponder layer upon layer of symbolism.

The Old Man and the Sea is the story of an unlucky but tenacious fisherman named Santiago who has gone eighty-four days without catching a fish. Determined to end his bad fortune, he sets out alone into the Gulf Stream north of Cuba where he enters into a struggle with a large marlin. Santiago is unable to reel the giant fish in and is instead carried along for two days and nights, further and further into open water. Hemingway frequently uses allegorical language, and explores the relationship between man, animal, and sea in a way that will have you invested in the welfare of both Santiago and the marlin in the end.

It’s fitting that it was Hemingway’s last and best-received book. Critics noted that it was a departure from his more realistic writing, so reading it before other works by the author gave me an interesting insight into his thoughts in later life. It’s also the most contemporary of all the books on this list; published in 1952.

Published in 1861, Silas Marner was written by Mary Ann Evans using her pen name George Eliot. She is also the author of the much longer novels Middlemarch and Daniel Deronda. I’m so glad I saw this book recommended by Tea and Ink Society members because it’s become one of my absolute favorites.

Silas Marner’s early life is spent in a strict and insular religious community, which he is forced to leave when betrayed by a friend and falsely accused of a crime. He is a very skillful weaver, and loses himself to work and reminiscence, keeping his new community at arms length. This community, also devoutly religious in its own way, regards him with suspicion until chance/providence intervenes to reawaken Marner to the outside world and forever change the lives of everyone around him.

Every character in this book is expertly developed. Their lives are intertwined in such a way that they depend on each other for fulfillment and potential happiness that they are sometimes blind to. You’ll want to keep reading to find out if each character gets what they deserve – or better.

This book is so aptly titled! Interestingly, Jane did not name the novel herself; that title was her brother Henry’s choice. It was published in 1817, six months after Jane Austen’s death, making it the last novel she completed.

The heroine, Anne Elliot, is 27 years old – significantly older than Austen’s other female protagonists. As the title suggests, the people and culture around her heavily influenced Anne’s personal history. She was persuaded at 19 to break her engagement with her first love, Frederick Wentworth, because her aunt felt that they were too young and he too unconnected in society.

Anne has remained unmarried since, and has never forgotten Wentworth. As the story begins, we learn that Anne and Frederick have been reunited, and life has changed the fortunes of both lovers in ways that make all question the prudence of previous advice.

As in her other works, Austen challenges gender roles and expectations, classism, and the influence of societal prejudices in this fast-paced and very enjoyable book.

Northanger Abbey was originally published alongside Persuasion in 1817. It was, however, Austen’s very first completed novel – originally written in 1803. Also notable is the fact that Austen wrote anonymously, and her brother revealed her identity in a biographical preface to this posthumously-published combined volume.

In contrast to Persuasion, the heroine of Northanger Abbey is just seventeen. Catherine Morland is described as a tomboy, very sweet and innocent, one of ten children born to a clergymen, and overly absorbed in the fantasy world of the novels she reads. As she comes of age and enters society, we get to cringe empathetically with the foibles of a girl learning to separate her romantic inner thought life from reality. It is a truly pleasant read!

5. The Pearl by John Steinbeck

This classic novella, published in 1947, had my heart pounding in my ears from the beginning! In a paradisiacal setting, the story of Kino and his family unfolds with very little prelude. A crisis sends Kino and his wife looking for a valuable pearl, which could prove to be either blessing or curse.

Readers are assailed with evocative themes from every page: greed, love, hope, superstition, dishonesty, bigotry, fear, and desperation. Honestly, it’s good that this one is short – my heart couldn’t take much more! Such a worthwhile read.

6. Heart of Darkness by Joseph Conrad

As you can surmise from the title, this is the heaviest book on the list. It’s a fictional first-person account of an expedition to the Congo during the ivory trade of the late 1800s. The narrator, Charles Marlow, recounts the trials and horrors he experienced as the captain of a river steamboat traveling, and sometimes stranded, for months in the heart of Africa.

The whole work is a juxtaposition of the “civilized” westerners and the “savage” Africans. It is controversial to this day as some read it as a treatise against imperialism and racism, and others say it has damaged the world’s perception of Africa and Africans. The author, Joseph Conrad, had experiences that paralleled his narrator’s, and wrote this novella eight years after returning from Africa.

Even though it was written in 1899, readers will find Heart of Darkness relevant and thought provoking in our current world climate. Do yourself a favor and let Kenneth Branagh read it to you. The Audible Signature Performance version brought it to life for me. Branagh is such an expert; I think I’ll always think of him as if he really IS Charles Marlow from now on.

7. The Importance of Being Earnest by Oscar Wilde

If you like puns, memorable dialogue, and romance full of ridiculous bumbling twists and turns, this play by Oscar Wilde is for you! Two men living double lives attempt to woo two unsuspecting women while using the same pseudonym (Earnest). Hilarity ensues. You’ll want to go back through each scene and read it twice just so you can laugh again.

An added bonus is that you can seek out a theatrical performance after reading, or watch the hilarious 2002 movie version starring Reese Witherspoon and Colin Firth.

8. My Antonia by Willa Cather

While it can stand alone, My Antonia is the third book in the Prairie Trilogy by Willa Cather. Published in 1918, and set in late 1800s Nebraska, My Antonia is the story of a family of Bohemian immigrants settling into community with other pioneers. It’s told from the perspective of Antonia’s childhood friend Jim, and paints a breathtaking and compassionate picture of the difficulties of life on the prairie.

It was a pleasure for me to read this book and think about my own Czech ancestors who came to the U.S. very near the time and place described in this novel. I laid awake at night wondering if they’d endured life in a dugout house, been frustrated by the isolation of immigrating here with no practice in English, and if they’d persevered with the grace of this book’s heroine.

Cather drew from her own life and hometown to make the setting almost as memorable as the events of the story. You’ll fall in love with Nebraska, and with Antonia.

What is your favorite short classic? Share in the comments any books you think should have made this list! 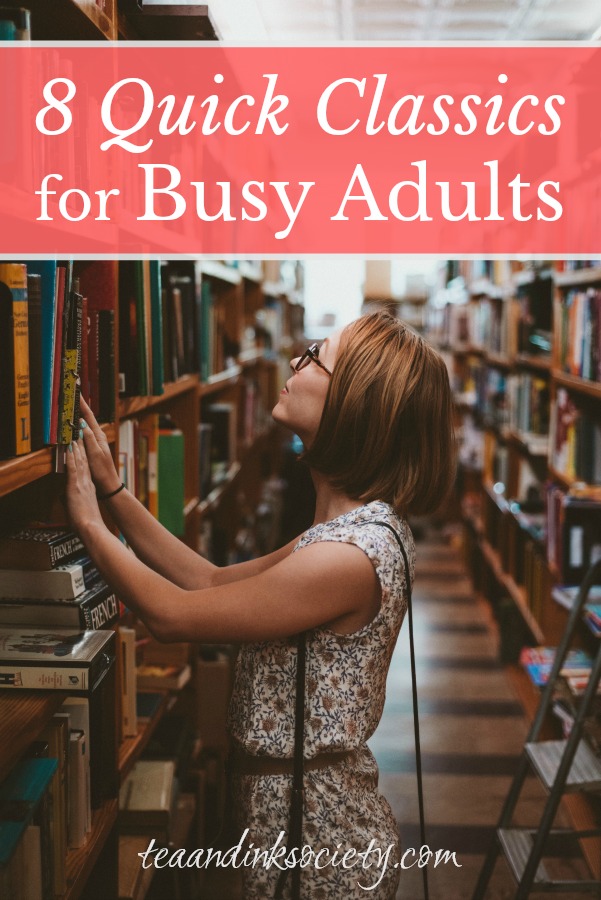