I love classic British literature, and for me, I can trace my interest back to these five titles. These must-read British novels will always have a space on my shelf and in my heart! 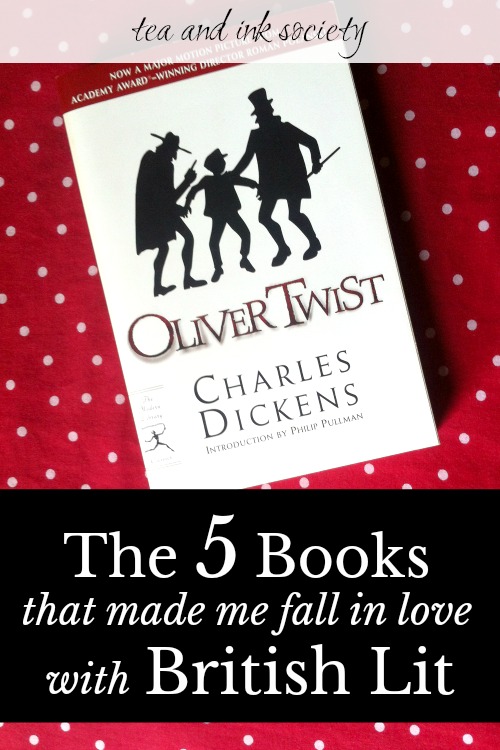 I think every reader has their favourites when it comes to genres or periods. The older I get the more widely I read, yet there are certain strains of literature I keep coming back to as old friends. For me, British literature is one of my strongest affinities, dating back to childhood and my teenage years. Certain books hooked my interest at just the right time, and still influence my reading picks years later.

I wonder if that’s true for other readers. Do any of your reading preferences today date back to your youth?

Here are five books in particular that swept me off my feet and made me a life-long fan of classic British literature!

The Books That Made Me Fall in Love with British Literature

This special book taught me that England harbors magic. I learned that there are secret doorways there to other worlds that you can find if you’re the right sort of person. And many of those doors masquerade as the covers of books. It used to be my “tradition” to re-read a few books in the Narnia series whenever I fell ill. Sometimes I’d reflect to myself “I haven’t been to Narnia in a while…when am I going to get sick again??”

I can trace my love for the adventure genre right back to Treasure Island, dramatically read to me by my dad in various appropriate voices. With its naval presence and imperial aims, Great Britain was the starting point for all sorts of fascinating and far-flung adventures—fictional and real. I know the novels written in the 1800s and early 1900s were “meant” for a male audience, but they ignited my imagination and fed my wanderlust.

Every book nerd has had that sinking feeling before: you have an opportunity to read, but suddenly you realize you’ve left your book at home. That happened to me when I was doing a spend-the-night babysitting gig as a teenager. The children were in bed and I had hot tea ready to go…but I’d forgotten my book! Blessedly, the family was a bookish one, so I got to browsing their shelves. I selected Oliver Twist, knowing it was a classic I should probably read at some point anyway.

I had no idea what was in store for me. The humor, the drama, the poignancy and plot twists spun me along and made me a Dickens fan for life. Years later I stood on Charles Dickens’s grave in Westminster Abbey, in the middle of that famous city he wrote about, and felt as giddy as Ebenezer Scrooge on Christmas morning!

Imagine being thoroughly versed in Little Women, Elsie Dinsmore, and Anne of Green Gables…and then encountering Jane Eyre! I was no stranger to the female bildungsroman, but Jane Eyre was darker, stranger, and more challenging than anything I’d read in the genre. It gave me shivers wondering what was going on in that attic, and made me long for my own windswept moors to wander. It also had me racing to the dictionary to look up words (Brontë novels still make me do that)!

Does every Christie fan remember their first? For me, The Seven Dials Mystery was a turning point in my reading career. I’d grown up steeped in Nancy Drew and other children’s and young adult mystery stories. But reading Seven Dials at age 13 launched me into the world of “grownup” classic crime–specifically British. My dad had several Agatha Christie paperbacks, and I picked the cover that looked the creepiest.

I was blown away. Reading Christie was a completely different kind of experience than my previous mystery reads. Her books are written with a cleverness and finesse I revered then and ever since. Never before had I read a mystery where the villain was hiding in plain sight, where the clues were all available to me. I wasn’t merely along for the ride—I had the opportunity to solve this thing, if my wits were up for it! I still remember penciling out a list of suspects during Sunday school, eager to skip to afternoon so I could see how the book ended. I didn’t figure any of it out, that first time, but I did become a Christie convert for life.

There are other British novels that inspired and shaped my reading habits in those formative years…The Hound of the Baskervilles, The Sword in the Stone, Persuasion, a little later…but these five were the most pivotal. From those sources I can trace many literary tributaries flowing through my reading log:

—Reading The Chronicles of Narnia as a child immersed me in the rich fantasy tradition of England, connecting me to George MacDonald, Arthurian legend old and new, The Lord of the Rings, as well as many fairy tales.

—Treasure Island set me on course to explore and love adventure novels such as King Solomon’s Mines, The Coral Island, and the works of A. E. W. Mason.

—Reading Oliver Twist flowed naturally to Thomas Hardy, Wilkie Collins, Elizabeth Gaskell, and pretty much any big-name Victorian author you can think of.

—Jane Eyre was the headwaters of my voyage into Gothic literature, priming me to later enjoy The Mysteries of Udolpho, Rebecca, and other classic Gothic favourites like these.

—The Seven Dials Mystery launched me into the Golden Age of Detective Fiction with Dorothy Sayers and G. K. Chesterton.