Meet 12 compelling antiheroes and antiheroines from classic literature. You may love to hate them, grudgingly admire them, or shamelessly judge them. Regardless, they’ll have you turning pages to find out how their stories end.

Antiheroes are some of the most fascinating protagonists you’ll come across in Bookland, and literature is full of them. That “protagonist” part is important, because to be an antihero you have to be one of the protagonists or main characters of the story. But while sympathetic, antiheroes lack many of the virtues, traits, or story arc you’d expect in a typical hero. The way the author positions their antihero character in the narrative is critical. Told another way, they could be an unequivocal villain, or a conventional hero.

And antiheroes don’t all look alike. They could take the form of a Byronic hero who gives in to dark impulses, or an apathetic man who’s too lazy to rise to heroism. Female antiheroines may be strong-willed and conniving, or lacking in the typical feminine traits of their era. What they all have in common is that the author makes you see their good qualities, but doesn’t allow you (or them) to escape from their dubious morals.

Books with antiheroes and antiheroines are worth reading on multiple levels. First, as a cautionary tale. What does a life look like when one’s core loves and desires are not rightly ordered? Or, to appreciate the author’s craft and the sheer power of storytelling. How does the author manage to make you feel for a character who’s so deeply flawed? Then, there’s the commentary and insight. What is the author showing us about life by telling it from this angle?

Let’s take a look at several memorable characters in classic literature that I believe fit the bill as excellent examples of antiheroes!

If you’re following along with our 2022 Classics Reading Challenge (and it’s never too late to join!), the theme for August is “a classic with an antihero or antiheroine.” Any of the following books would be a great fit for the category!

Great Antiheroes and Antiheroines in Literature

Heathcliff is probably the most iconic character from Emily Brontë’s broody, tumultuous family drama. You hear his story from the knowing yet compassionate perspective of the housekeeper Nelly Dean, who exposes his faults but shows us he’s someone to be pitied as well. Mistreatment and misunderstanding in his youth spur Heathcliff to seek revenge as an adult. Ironically, his villainous actions ultimately rouse other characters to choose a more heroic path.

In a novel packed with characters, Becky Sharp dominates Thackeray’s satiric masterpiece (tellingly subtitled “A Novel Without a Hero”). And that would certainly be Becky’s goal. She starts out poor and unimportant but doesn’t mean to stay that way, using her cleverness and limitless ambition to climb the social ladder and wrap everyone she can around her finger.

Setting: England and the European continent during and after the Napoleonic Wars.

Hester Prynne from The Scarlet Letter by Nathaniel Hawthorne

The townspeople of the old Massachusetts Bay Colony would have you believe that Hester Prynne is an antiheroine–maybe even a villainess. She’s defined by the red “A” she wears, marking her an adulterous. But despite their hostility, Hester invariably responds with patience and kindness. Ultimately, Hester serves as the scapegoat for the anti-heroism of the entire town.

Sydney Carton from A Tale of Two Cities by Charles Dickens

Sydney Carton is an intelligent but dissolute lawyer with little (at first) to live for. It’s unclear why he has such a gloomy outlook on life, but he certainly does–he’s cynical and slovenly, aimlessly pacing the city streets at night or filling himself with alcohol. Carton himself would most decidedly agree that he’s not a hero. But then all that stuff happens at the end of the book–which I can’t tell you if you somehow don’t already know–and everything Sydney Carton insists about himself gets turned on its head.

Setting: London and Paris before and during the French Revolution.

This Victorian sensation novel gives us a pair of problematic protagonists. There’s the anti-hero Robert Audley, and his anti-heroine foil Lucy Audley, who’s married to Robert’s uncle. When we first meet Robert he’s a lazy, directionless young man whose greatest exertions are smoking a pipe and reading French novels. Lucy on the other hand seems angelically good, if a bit vacuous. As the two characters become antagonists towards each other, one appears to grow more villainous, and one more heroic. But still, everything might not be as it seems: with careful word choice, Braddon maintains moral grayness for both characters throughout the story.

Michael Henchard from The Mayor of Casterbridge by Thomas Hardy

After a major mistake–getting drunk and selling his wife and daughter at the fair–Michael Henchard vows not to touch alcohol for the next twenty-one years. Instead, he strives to cultivate a good reputation for himself, eventually rising to become mayor of his town. Throughout the twists and turns of his life (and there are many!) Henchard shows himself to be honest, generous, and a man of principle. But then there’s his painfully obvious faults, his proclivity for self-sabotage. The novel is a thoroughly absorbing character study and, in this reader’s opinion, Hardy creates one of the greatest tragic heroes ever found in literature.

Setting: Rural south of England in the early 1800s.

Ostensibly, Dorian Gray appears like hero material–young, innocent, ready for his own coming-of-age story. He’s even referred to as “Prince Charming.” But in his vanity and naïveté, Dorian embraces the hedonistic worldview of the antagonist Lord Henry “Harry” Wotton (Wilde plays on the nickname for the Devil here, “Old Harry”). Through Dorian’s meteoric fall into vice, Wilde explores themes of morality, art and artifice, fate and free will.

Erik from The Phantom of the Opera by Gaston Leroux

Erik has the classic “hero’s wound,” both in his physical deformity and his psychological trauma. Although this–along with his brilliant mind and devotion to Christine–makes him sympathetic, Erik does not learn or heal from his wounds as the typical hero would. Well, until the end, and that’s what makes the story so darned poignant!

Scarlett O’Hara from Gone with the Wind by Margaret Mitchell

Scarlett O’Hara is a quintessential Slytherin, if you like to sort your literature that way! She’s intelligent, endlessly resourceful, and fiercely loyal to her family home. These positive traits make her someone to admire, even if you surprise yourself by doing so (because she’s also cruel, selfish, and vain)!

Setting: Georgia during the American Civil War and Reconstruction era.

Cleo Judson from The Living is Easy by Dorothy West

Born to poor Southern sharecroppers, Cleo finds a new life in Boston where she climbs the social ladder by marrying “The Black Banana King” and establishing herself among the city’s black upper-class. Although her traits of independence and determination could position Cleo as a heroine, in Cleo’s lexicon love means weakness, and she uses her strong personality to dominate everyone around her, breaking their worlds to build her own.

Setting: Boston, during World War I

Du Maurier forays into the time-travel genre when she has protagonist Dick Young take an experimental drug that (temporarily) transports him back to the fourteenth century. Dick is dissatisfied with his present-day life and marriage, and becomes increasingly invested in his repeated “trips” back in time. As an unheroic man and husband, Dick finds in the earlier time a world in which he would like to be a hero…but ironically, he’s invisible in that world and unable to make a difference.

What famous examples of antiheroes from books would you add to this list? I realize the antihero classification can be a bit subjective, so please: make your case for why any of these–or others–should or should not qualify!

For a post on female protagonists who do fit the “heroine” label, head here for this roundup of 9 amazing literary heroines. 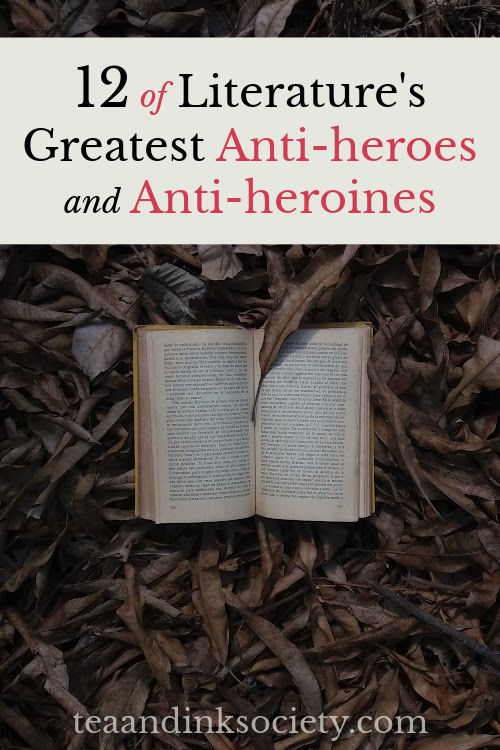