All good stories contain symbolism. Disney’s Beauty and the Beast is full of vanitas symbols that add a new depth of meaning to a tale as old as time. 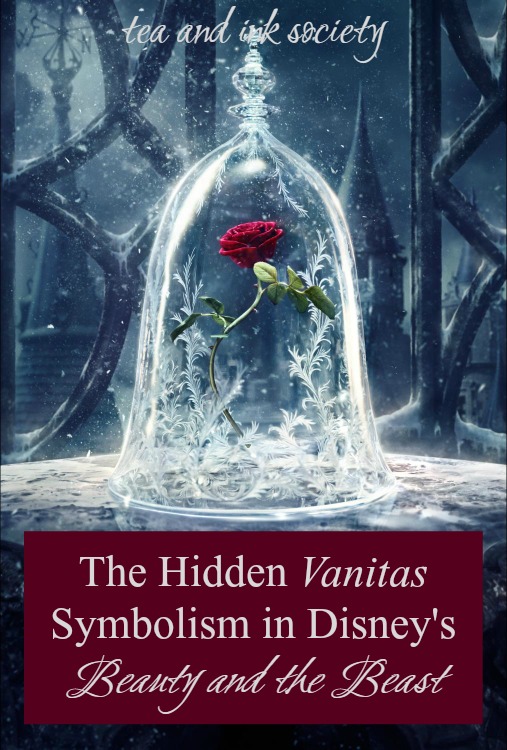 Analyzing Beauty and the Beast: Hidden Meanings and Symbols

Symbolism adds depth to a story and helps you see it in fresh and fascinating ways. Sure, you don’t have to be a symbolism treasure hunter to enjoy a story–but it’s quite fun to dip below the surface and speculate about those deeper, hidden meanings!

I remember reading Hawthorne’s The Scarlet Letter in high school and being only mildly engaged. I loved reading, so I felt a little guilty that I found the book so boring. But when I read the novel again in college I discovered a completely different book. The linchpin was a very knowledgeable professor who showed us that The Scarlet Letter is alive with a web of beautiful and complex symbols.

Symbolism changed the way I engaged with The Scarlet Letter, and I’ve been more attuned to seeking it in stories ever since.

Beauty and the Beast contains some pretty obvious symbols, and their main purpose is to give us basic information about the leading cast of characters. For instance, the book that Belle reads in the opening village scene symbolizes her thirst for knowledge, novelty, and challenging of social norms. That book tells us just as much about her as the lyrics in her opening song.

What does the rose symbolize in Beauty and the Beast?

Perhaps the most iconic symbol in Beauty and the Beast is the glass-encased rose. A rose symbolizes love, but this particular rose is dying–just like the Beast’s hopes for true love. Even more importantly, the rose symbolizes the fragile nature of life and the Beast’s need to reform from his previous life of vanity and excess in order to restore his kingdom.

What is a vanitas painting?

Vanitas is a genre of still life painting common in northern Europe during the 16th to 18th centuries. Vanitas paintings often depict a collection of luxurious, richly-detailed objects, all of which symbolize the brevity of life and the futility of worldly pleasures (the Latin vanitas means “emptiness”). If you’ve ever visited an art museum or taken an art history class, it’s a pretty sure bet you’ve seen a vanitas.

The Beauty and the Beast fairy tale is set in the mid-1700s in France, and the live-action remake is as gorgeous and opulent as a vanitas painting of the period. If the rose in Beauty and the Beast borrows from this tradition of artistic symbolism, then it points to more than just the status of the Beast’s love life. Flowers are commonly used in vanitas paintings because flowers fade and die, reminding us that the beauties and luxuries of this life will pass away. Before he became the Beast, the prince in this fairy tale felt invincible; he had everything he could ask for. In his arrogance, he certainly wasn’t thinking it could all be taken away in a moment.

When Agathe the enchantress casts her spell on the castle and the prince, she gives him the enchanted rose–a constant reminder of the transience of life. Will the prince/Beast discover something that can give a deeper meaning and purpose to life, before it’s too late? Well, we’ll get to that in a moment.(:

Zoom out from the solitary rose and you’ll see many more symbols with vanitas significance in this story. In fact, two of them are so obvious that you’ll have a hard time convincing yourself that they’re not intentional. Besides flowers, two types of objects that appear in almost every vanitas painting are candles and time pieces. Sound familiar? Yep–Lumiére and Cogsworth! 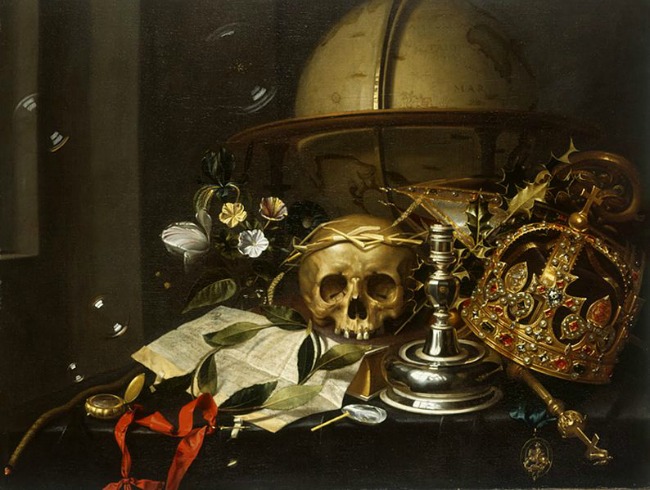 As I thought about the Beauty and the Beast movie and looked through vanitas paintings online, I came up with this list of vanitas symbols and their possible correlation in the Disney film:

Common vanitas symbols in Beauty and the Beast 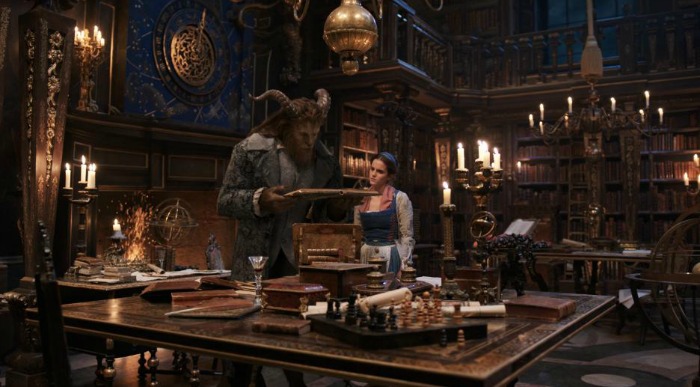 The lavish set and production of Beauty and the Beast echoes the richly-detailed symbolism of a vanitas painting. (Image by Disney. Used with permission.)

Each of the vanitas objects prompt us to reflect on the nature of life and symbolize either life’s transience (think ephemeral bubbles, candles burning down) or worldly pursuits and passions (quest for knowledge in books and maps, pleasures like music and tapestries). But did anyone at Disney really intend for us to glean so much from their character and prop choices?

I my opinion, it doesn’t matter if they did or not. The symbols in this film or in any piece of story are no less important or interesting because the creator intended something different than we imagine. Stories are incredibly layered; it’s inevitable that a story will take on a life of its own. The finished work always displays a broader spectrum of meaning than the creator intended, and this meaning will continue to expand with cultural shifts.

You can actually make a case that the vanitas symbols in Beauty and the Beast are intentional. The Disney team often draws inspiration from famous works of art. One recent hard-to-miss example is when Anna from Frozen leaps in front of a painting that’s clearly an adaptation of Fragonard’s The Swing. One astute Disney fan noticed that The Swing makes an appearance in the 1991 animated Beauty and the Beast, too. The same fan pointed out other reproductions of famous paintings in the Beast’s palace, including Girl with a Pearl Earring by Johannes Vermeer, a Dutch artist familiar with the vanitas paintings of his day.

We also know that the creators of the original 1991 Disney Beauty and the Beast visited France to glean inspiration for their art. Cogsworth references Baroque and Rococo designs as he gives Belle a tour of the castle. The live action Beauty and the Beast reinforces the lush and opulent style of mid-18th France, which can be both beautiful and garish.

What does the Beast (and what do we) learn from the symbols in Beauty and the Beast?

The Beast’s palace is basically a living vanitas painting. So, do these constant reminders of the ephemeral nature of life and worldly goods have any effect on the Beast? Yes, but at first it only seems to be a negative effect, as the Beast grows resentful and cuts himself off from humanity. The positive effects only surface when an outside force–in the form of Belle–comes into the story.

Belle and the Beast fall in love. Not at first sight, that’s for sure, but against the odds. And as their love blooms (to use some rose imagery!) things change.

Disney seems to pick up on the fact that true love is redemptive and transformative. In the opening scenes of the 2017 version, Agathe narrates that the prince/Beast “taxed the village to fill his castle with the most beautiful objects ​and his parties with the most beautiful people.​” But love turns the Beast from a vain, eat-drink-and-be-merry prince in a garish, over-the-top castle to a self-sacrificing king who’s ready to receive his people with hospitality. The prince’s rebirth is echoed in the physical changes that the castle undergoes, as well as the restored humanity of the servants. 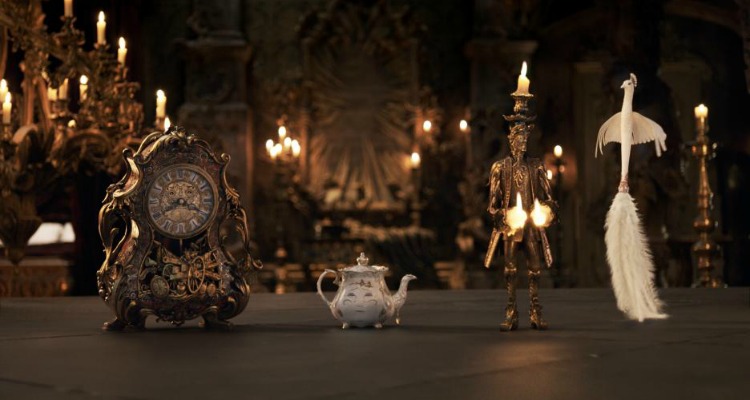 Vanitas symbols abound in the 2017 Beauty and the Beast movie! (Image by Disney. Used with permission.)

The 2017 Beauty and the Beast movie adds this new twist with regards to the servants: if the curse isn’t lifted, they will become inanimate objects forever. They will be beautiful objects, but inanimate–serving only as an artful reminder of the vanity of a bygone era. I love this twist because it adds to the urgency of the Beast’s need to recast his approach to life. When the curse breaks, the servants shed their symbolic forms and become human once more.

Through Belle, the Beast comes to understand that life is precious and meant to be cherished–and shared. Life and his place in it is not a commodity to be consumed and squandered. Belle helps the Beast to enjoy life again, not in a selfish and indulgent way as he did before, but with a truthful, selfless love that looks outward and leaves a legacy of hope.

The new flowers that bloom when the curse is lifted will eventually die (as will the again-mortal Beast and servants), but they’ll be a living reminder that while life is fleeting, it’s also incredibly valuable.

What are some of your favourite symbols in stories? Did you notice any interesting symbols in Beauty and the Beast?

Love fairy tales and fantasy? Be sure to read these other posts here at Tea and Ink Society!