These famous literary friendships from classic books show us what it looks like to be a true friend in our own real-world relationships. Here you’ll find strong female friendships in literature, unlikely duos, and famous literary trios. Why not read these books about friendship with your own bestie? It’s always fun to discuss a book after you read it, especially if it’s with a kindred spirit! 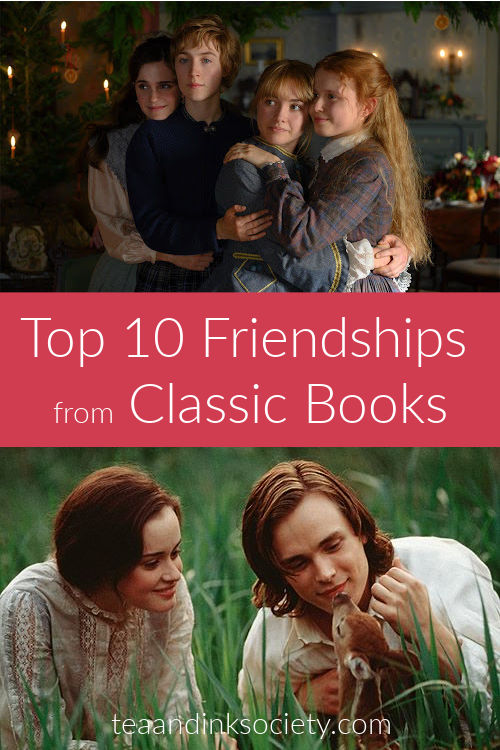 Although we thrill to the romances of Jane and Rochester or Lizzie and Mr. Darcy, I think we crave friendships as much as we do a good love story. There’s something very satisfying about a novel that celebrates the tight bonds of friendship, don’t you think?

And while it would be silly to try to emulate a character’s love story, it makes more sense to cultivate similar friendships. We wouldn’t want to copy the way Anne Shirley despises her future soulmate, for instance, but we can definitely get on board with pledging our loyalty to a Diana Barry and sticking together through thick and thin.

The best friendships in fiction satisfy us and, hopefully, also inspire us to be more intentional about our own relationships. I think the following 10 friendships from literature certainly do. In a technology-saturated world, these old-fashioned friendships–developed over tea or music or adventures–are both refreshing and timeless.

Let them be a reminder to invest (or re-invest) in your own friends.

From The Lord of the Rings by J. R. R. Tolkien

From Anne’s House of Dreams by L. M. Montgomery

“I am your friend and you are mine, for always,” she said. “Such a friend as I never had before. I have had many dear and beloved friends–but there is a something in you, Leslie, that I never found in anyone else. You have more to offer me in that rich nature of yours, and I have more to give you than I had in my careless girlhood. We are both women–and friends forever.”

Yes, there’s Anne and Diana, who are “bosom friends.” But if you go deeper into the Anne series you’ll discover Leslie Moore, a vibrant and complex character who actually has much more affinity with Anne than Anne’s childhood friend. Sometimes the friendships that are formed through pain and hardship are the sweetest. Anne and Leslie’s friendship flourishes after suffering, and it helps both women to heal. 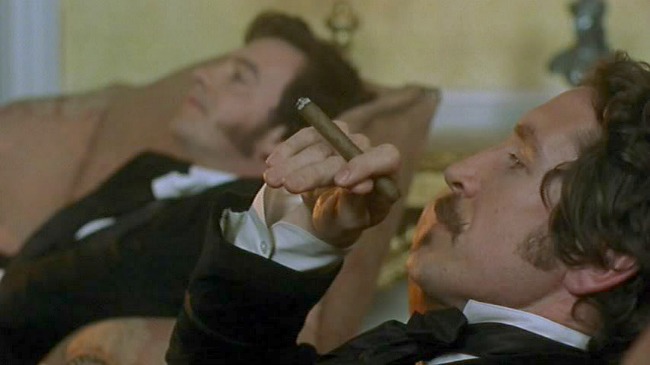 From Our Mutual Friend by Charles Dickens

These two aspiring lawyers are fun to watch because of their dry senses of humor, their cigar-smoking companionship, and their sarcastic commentary on the people in their social circle. By their own admission, Mortimer and Eugene are lazy, disillusioned, and bored, and their satirical outlook on life is one of the things that make them entertaining. But their friendship also matures beyond shared commiserations and becomes a sustaining, redemptive force for both of them. By the novel’s end they inspire each other to become better men and to make bold, courageous choices.

From Calvin and Hobbes comics by Bill Waterson

This friendship might be imaginary, but it encapsulates the ideal childhood friendship–someone who’s always there, a constant companion and pal, someone you can spend long, lazy summer days with or grumble over school and bad weather. 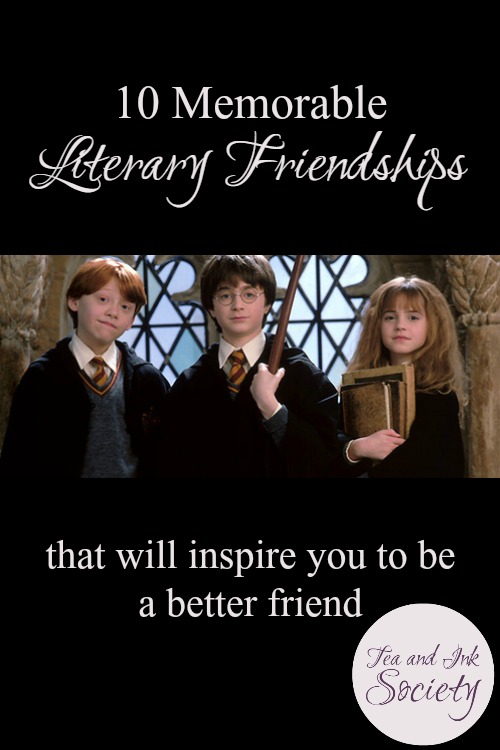 From the Harry Potter series by J. K. Rowling

It’s not often that we get seven long novels to watch a friendship develop! And this trio’s friendship gets some serious development, not only because it’s solidified during such formative years, but because the stakes the kids are up against are so high. Although there are a bajillion themes in Harry Potter, friendship seems to be one that Rowling is particularly interested in. At the series’ climax, it’s Harry’s love for his friends (and their love for him), that enables them to face Lord Voldemort.

From Little Women by Louisa May Alcott

The relationship of the March sisters in Little Women is what people remember, perhaps even more than the girls’ love stories. In fact, Little Women is one of the best examples of strong female friendships in literature. Alcott chronicles the girls’ friendship from childhood through early adulthood. We get to watch their homemade theatricals and their Pilgrim’s Progress role playing, we watch them fight and learn to forgive, and we see the way their friendships change but remain strong as they relate to each other as adults.

I identify with these sororal friendships more than other literary friendships because growing up, my three sisters were usually my best friends. We weren’t all personality matches of the March sisters, but we interacted in many of the same ways (even down to the homemade theatricals!).

From the Aubrey/Maturin novels by Patrick O’Brian

“Although [they] were almost as unlike as men could be, unlike in nationality, religion, education, size, shape, profession, habit of mind, they were united in a deep love for music, and many and many an evening had they played together, violin answering cello or both singing together far into the night.”

If you want a prime example of strong male friendship in literature, look no further than Patrick O’Brian’s maritime series, which explores (among other things) the bonds of friendship between Captain Jack Aubrey and ship’s surgeon Stephen Maturin.

It’s their extreme differences that make Aubrey and Maturin such an interesting pair. They’re complete opposites, yet the twenty-one novels in which they appear are as much held together by their friendship as they are with the ongoing narrative of nautical escapades. Some of the best friendships are the ones that both shake us up to view the world differently–and at the same time balance us out. 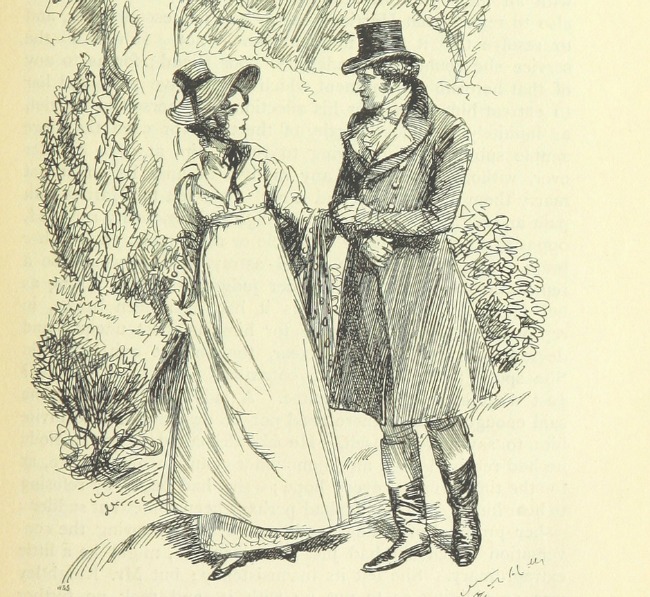 from Emma by Jane Austen

From The Secret Garden by Frances Hodgson Burnett

I grew up with this classic children’s novel, but it wasn’t until recently that I realised the awakening garden in the story is a metaphor for the blossoming friendship of the children who tend it. Well, the garden is probably a metaphor for lots of things, actually. But it is beautiful to watch the personalities of the trio unfold when they take ownership of the garden.

10. Winnie Foster and the Tucks

from Tuck Everlasting by Natalie Babbit

“They were friends, her friends. She was running away after all, but she was not alone. Closing the gate on her oldest fears as she had closed the gate of her own fenced yard, she discovered the wings she’d always wished she had. And all at once she was elated.”

Ten-year-old Winnie Foster has only herself (and perhaps a toad) for a friend when the novel begins. Her friendship with the Tucks is as unexpected as it is necessary. And even though she only spends a few days with them, their story reminds us that friendships have the power to change the whole course of our lives.

What are your favorite examples of books with strong friendships?

Want more copy-worthy characters to emulate from classic lit? Read this post on 9 Literary Heroines We Should All Try to Be More Like, and learn How to Be an L. M. Montgomery Heroine in a 21st-Century World.