Mary Stewart is a lesser-known author who helped establish the romantic suspense genre in the 1950s, and contributed to the resurgence of the fantasy novel in the 1970s with her Merlin trilogy. She is a gifted and classy writer with a long career, and I can’t wait for you to “meet” her now! 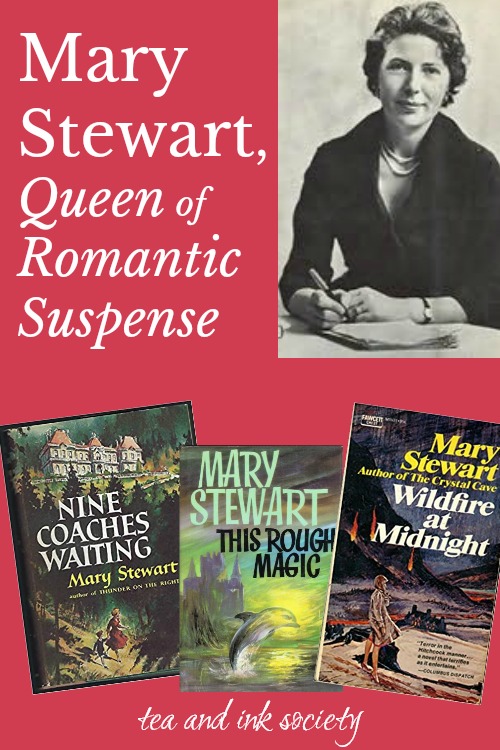 For the well-read woman, there is nothing quite so sweet and thrilling as discovering a new favourite author. You think you have a pretty good grasp on the books and authors you like, and then bam, a new author drops into your life and you rush to make room on your shelves.

Where have you been all my life? You ask. But they’ve come at precisely the right time, just when you were poised to be a perfect match. And now you have all their books to look forward to, like a deliciously anticipated vacation.

I’m sure this has happened to you, Reader, and if it hasn’t, then it’s my fondest wish that the books mentioned here at Tea and Ink Society will spark that zest for you!

For my own part, Mary Stewart was just such an author who quickly became a favourite when I discovered her a few years back.

Mary Stewart isn’t an author you find on required school reading lists or “100 Great Classics.” She’s one you must hear about from a loyal fan, or perhaps that you stumble upon deep in the library stacks, or tucked lovingly on your aunt’s bookshelf. But that’s not because she isn’t good. In a way it makes it all the more fun to read her books, because you feel as if you’re a shareholder in a secret treasure that the masses don’t possess.

Although she wrote a handful of children’s stories and poetry, Mary Stewart is better known for her bestselling Arthurian legend series and her fifteen standalone novels, which fall under the broad genre of romantic suspense. Stewart didn’t like pigeon-holing her novels into a strict genre; instead, she claimed she was simply a “teller of tales.”

What you’ll find in all of Mary Stewart’s standalone novels is varying doses of mystery and intrigue, always with a satisfying dash of romance. Stewart’s writing is intelligent and stylish, with evocative settings and independent, gutsy heroines who often have to work their way out of dangerous situations. (A bit like Nancy Drew for grownups.) Her earlier books supply greater drama and thrills and are more Gothic in tone, while her later novels are gentler but still masterfully plotted.

My own introduction to Mary Stewart began with Stormy Petrel, which is a perfect rainy day read. It’s actually one of her less popular novels, but it was enough to make me want more!

For an author comparison, I would say Mary Stewart is akin to Daphne du Maurier. If you like the novel Rebecca, it’s a safe bet to say you’ll like Mary Stewart. Both du Maurier and Stewart employ psychological suspense, but a lot more happens in Stewart’s novels.

For a modern-day author equivalent, I would actually compare Stewart to Ruth Ware. Like Stewart, Ware borrows from a variety of genres and can’t be easily pigeonholed. Setting and atmosphere are integral to the style of both authors. Using first-person narration, both authors give you an intimate picture of their characters’ psychological state (although Ware’s heroines are far less stable and reliable).

Mary Stewart was a British novelist, born right in the middle of World War I to the Rainbow family. (As a clergyman, her father fulfilled duties at home rather than abroad.) Stewart studied English at Durham University. Her academic background is evident in her novels–literary allusions are plentiful and it’s a delight to collect them as you read.

Mary met her husband Frederick at a VE Day celebration dance in 1945. It was a costume party, and Frederick was unselfconsciously wearing a girl’s gym tunic, lilac socks, and a red hair ribbon. It was pretty much love at first sight, and the couple were married three months later.

Frederick Stewart was fervently supportive of his wife’s writing, and encouraged her to submit the manuscript of her debut novel Madam, Will You Talk? to Hodder & Stoughton. The story was serialized in 1954 and published in book form the following year. After that, Mary Stewart was fairly prolific, publishing a novel every year or two for the next four decades. She had a lovely tradition where she would buy herself a new piece of jewelry to celebrate each novel’s debut.

The Stewarts weren’t able to have children, but led a busy life between Mary’s writing career and Frederick’s position as chairman of the Geology Department at the University of Edinburgh. They divided their time between Edinburgh and their home in the Scottish Highlands on Loch Awe.

Here are some pictures of their Loch Awe residence, which itself looks like something out of one of Mary Stewart’s novels! 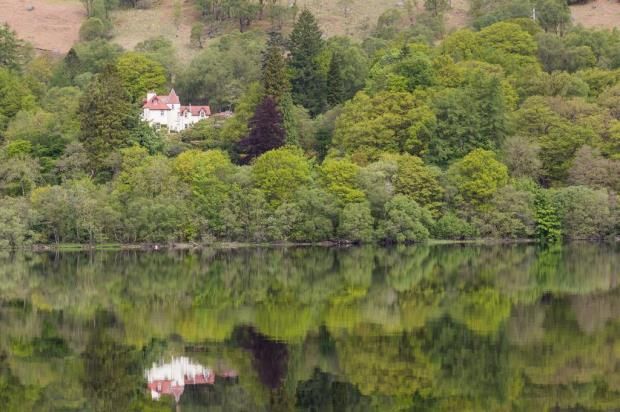 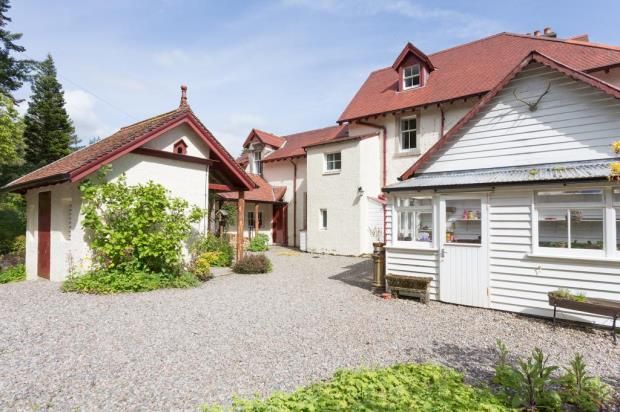 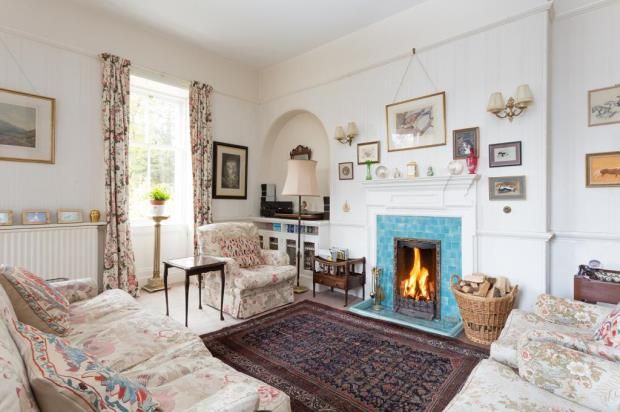 The Stewarts had many adventures traveling abroad to places that Mary would later use as settings for her books. At home, they enjoyed a private life and shared interests around gardening, nature, art, and their beloved family pets.

Because setting is so important and vividly drawn in each of Stewart’s romantic suspense novels, I’ve made notes of where each is set. So, if you’d like to take a literary “trip,” pick your destination!

Madam, Will You Talk? (1955) – set in Provence, France
Wildfire at Midnight (1956) – set on the Isle of Skye, Scotland. Murder mystery elements.
Thunder on the Right (1957) – a Gothic novel set in the Pyrenees in France
Nine Coaches Waiting (1958) – elements of Gothic, fairy tale, and fugitive story. Set in the mountainous Savoy region of France.
My Brother Michael (1959) – set in mainland Greece
The Ivy Tree (1961) – an impostor/mistaken identity story set in Northumberland, England
The Moon-Spinners (1962) – set in Crete (there is a 1964 movie starring Haley Mills that is loosely based on the book. I enjoyed the film.)
This Rough Magic (1964) – set in Corfu
Airs Above the Ground (1965) – a murder mystery with a touch of espionage, set in Austria
The Gabriel Hounds (1967) – set in Syria and Lebanon
The Wind Off The Small Isles (1968) – a novella set in the Canary Islands, Spain
Touch Not the Cat (1976) – set in the Malvern Hills in the West Midlands of England. Fantasy/supernatural elements.
Thornyhold (1988) – set in Wiltshire in South West England. Fantasy/supernatural elements.
Stormy Petrel (1991) – set on a fictional island in the Hebrides of Scotland
Rose Cottage (1997) – a gentle mystery of family secrets, set in a small village in the North of England

The Lost One (1960) – set in Northumberland. It’s a prequel to The Wind Off The Small Isles.
The Loch (1971) – a narrative essay that describes the natural beauty of Scotland

The first three titles make up the Merlin Trilogy. The Wicked Day is about Mordred, and The Prince and the Pilgrim is a standalone novel that takes place during Arthur’s reign.

The Little Broomstick (1971) – This was recently made into an anime movie titled Mary and the Witch’s Flower. If you’re a fan of Studio Ghibli or Hayao Miyazaki films, you’ll love this, too.
Ludo and the Star Horse (1974)
A Walk in Wolf Wood (1980)
The Castle of Danger (1981) – children’s version of Nine Coaches Waiting

Any time you’re in a used book store, I’d suggest checking for Mary Stewart. But remember how I said that she can’t be pigeonholed into one particular genre? That makes it a bit tricky to locate her in the book store. You’ll have to check the mystery, romance, general fiction, and old/rare books sections to ensure you’re thoroughly canvassing the shop for Mary Stewart’s romances! And then you’ll have to check fantasy for her Arthurian books and the children’s literature section for her juvenile titles!

Of course, you can always do an internet search of her name and titles to find used copies online.

There have been many editions of Mary Stewart’s novels over the years, some better than others. You might happen upon a vintage cover you love, but if you want a uniform set that’s readily available, the 2017 Hodder & Stoughton reissues are the best, in my opinion! They’re inspired by vintage travel posters. Here’s a sampling:

To dig deeper on Mary Stewart, I recommend the Mary Queen of Plots blog. It’s no longer updated, but if you browse through the archives you’ll learn lots of fun backstory on Mary Stewart and her writings, as well as see cover art through the decades.

So, have I inspired you to read Mary Stewart? Or if you’re already a fan, tell me what your favourite Mary Stewart novel is! If you know someone who would be interested to learn about Mary Stewart, please share this post with them!