Each year, dozens of books get movie and TV adaptations. It’s fascinating to watch stories transfer from one medium to another, page to screen. But I’m always most interested when classic books are made into movies. For one thing, it’s usually harder to adapt a classic book successfully than it is to make a modern film of a modern book. Filmmakers have to honour both the source material and their current audience–a hefty challenge!

This year, I’m keeping a skeptical yet hopeful eye on 18+ upcoming movie and television adaptations from classic literature. I think I’m most excited about the new book-to-film versions of Emma, Dune, Death on the Nile, and Rebecca. Yes, we have some good stuff headed to screen this year!

Updated November 13, 2021: I’ve made updates in red to note where you can watch these, or if there is new information about them. Bookmark this post or pin it so you can check back later!

Watch for these feature-length films based on classic novels…and try to read the book before they hit the screen! Check out the trailers for these upcoming book-to-movie releases and let me know what you think in the Comments section at the end of this post!

Despite its start-studded cast (including Robert Downey Jr., Emma Thompson and Tom Holland), Dolittle hasn’t done well in the box office so far. If you decide to pass, pick up one of the novels in Hugh Lofting’s original series instead–they’re delightful! As a child, I also immensely enjoyed the 1967 movie version, but I have no idea if it’s a “good” movie by grownup standards.

Dolittle is available to stream on HBO Max. Buy the DVD here.

The Personal History of David Copperfield (May 8)

Dev Patel plays the title role in this adaptation of Charles Dickens’s novel, which Dickens called his favourite “of all his children.” I love that there are so many miniseries adaptations of Dickens’s works, but I’m always interested to see what direction the big-screen versions will take. From the trailer, it looks like this one is decidedly comedic.

The Personal History of David Copperfield is available to stream on HBO Max, or buy on Prime Video.

Anya Taylor-Joy plays Emma Woodhouse in this version of Jane Austen’s novel. I liked both the Gwyneth Paltrow and Ramola Garai versions, but this one looks very promising, too–and just plain gorgeous. That could be because the director, Autumn de Wilde, is better known as a photographer. Emma is her first feature film.

I watched this in theaters and it’s one of my favourite Jane Austen adaptations to date! So lovely and thoughtful and funny. Rent from Amazon here. Own the DVD here.

The Call of the Wild (February 21)

This movie based on Jack London’s adventure novel was slated to come out last year but got pushed back. (As movies often do!) It will star Harrison Ford, Dan Stevens, and Karen Gillan.

Call of the Wild 2020 is available to stream on HBO Max. Or get the DVD here.

If you were a bookish girl in the 90s, chances are you were quite familiar with the film versions of The Secret Garden and Little Women that came out during that decade. Well, we got a lovely Little Women remake last year, so I suppose now it’s time for The Secret Garden! I have to admit I’m a little apprehensive, though. The trailer makes the garden look a bit…fake…to me. What do you think? Also, they’ve changed the period setting to be post-WWII instead of early 1900s, as it is in Frances Hodgson Burnett’s novel.

You can stream The Secret Garden 2020 on Hulu. The DVD is currently 40% off on Amazon.

Greyhound will be an adaptation of C. S. Forester’s novel The Good Shepherd. Like Forester’s Horatio Hornblower series, this is a nautical/war story, but the setting is WWII rather than Hornblower’s Napoleonic wars. Tom Hanks is writing and starring.

I watched this and it’s an excellent film for movie night! Tight, engrossing, pulls you right in. You can stream Greyhound movie on AppleTV. We signed up for the free trial just so we could watch it!

Death on the Nile (October 9)

Kenneth Branagh directed and starred in an excellent adaptation of Agatha Christie’s Murder on the Orient Express in 2017, and now he’s back with another one of Christie’s most popular works. Personally, I hope he has several more up his sleeve.

Death on the Nile got pushed back to a February 11, 2022 release date.

Frank Herbert’s famous science fiction novel is finally coming to the big screen again, and it looks promising. Denis Villeneuve directs, with Timothée Chalamet as Paul Atreides (who played Laurie in the recent Little Women), and Hans Zimmer composing the score. Apparently the film’s backers expect it to do well; they’ve commissioned a spin-off series called Dune: The Sisterhood, which will be available on the upcoming streaming service HBO Max.

Dune is currently available to stream on HBO Max.

We can look for a new film version of Daphne du Maurier’s classic to hit Netflix sometime this year! Lily James is cast as Mrs. de Winter, with Armie Hammer as Maxim. Keeley Hawes (always a favourite of mine!) plays Maxim’s sister.

Rebecca 2020 is available to stream on Netflix. I thought this was an excellent film adaptation and true to the book!

These current and upcoming book-to-screen adaptations will be available from streaming services Netflix, Masterpiece/PBS, Amazon Prime, and Peacock.

This 3-part series by Steven Moffat and Mark Gatiss (of Sherlock) aired on the BBC in January, and is now available on Netflix. It’s received generally favourable reviews from critics, although it makes some pretty significant departures from Bram Stoker’s novel. I have yet to watch it, but I will update here with my thoughts when I do, since I am a fan of the book!

Update: I watched the first episode so far and I’m not in a hurry to watch the rest. I found this adaptation to be a disappointment. There’s major changes to the book, and the horror is either campy or downright disgusting.

Jane Austen had a couple of unfinished manuscripts when she died, and Sanditon was one of them. The story follows Charlotte Heywood to the seaside town of Sanditon, which her friends are hoping to develop into a fashionable resort. Sanditon has never been adapted for the screen before, but with his long resume of period dramas, Andrew Davies was a solid choice for screenwriter. The series aired in the UK in fall 2019, but it’s currently being released in the United States via Masterpiece/PBS. I have yet to watch it, but I’m hopeful!

We’ve got a number of Agatha Christie adaptations going around right now, and The Pale Horse is next in the lineup. The same team who made The ABC Murders last year is behind this 2-part miniseries, which stars Rufus Sewell. It will release in both the UK and on Amazon Prime. Don’t expect to see Poirot or Miss Marple in this…The Pale Horse is one of Christie’s “standalone” novels, although the book does include a few minor recurring characters.

The Pale Horse is available to stream with an Amazon Prime subscription.

All Creatures Great and Small (late 2020)

This year marks the 50th anniversary of James Herriot’s first semi-autobiographical novel, which follows the experiences of a veterinarian in rural Yorkshire. Herriot’s novels and the subsequent film and TV adaptations have a loyal following, but the team behind this new series are promising to keep it faithful and familiar.

This TV series is wonderful! Just a delightful, cozy watch. I’m glad Season 2 will be coming out in 2022! Stream All Creatures Great and Small on Amazon.

Around the World in 80 Days

David Tennant (from Doctor Who) will star in an eight-part series based on Jules Verne’s classic novel. It will air on the BBC in the United Kingdom, as well as airing in France, Italy, and Germany. Filming will begin in South Africa this February.

The BBC is making a 3-part miniseries of Rumer Godden’s bestselling 1939 novel. It follows the story of a group of Anglican nuns trying to establish a school and hospital in the foothills of the Himalayas.

Published in 1749, Henry Fielding’s Tom Jones was an early and influential novel. Don’t expect the Regency manners and sensibilities of a Jane Austen story, though. If you’re familiar with 18th-century literature, you know this was quite a different era in the literary world(; This adaptation will star Solly McLeod and Sophie Wilde.

Tom Jones will come to Mastpiece/PBS in 2022.

Brave New World 2020 is available to stream on Peacock.

Death Comes As The End

There aren’t many details about this adaptation of Agatha Christie’s novel, but we know that the screenwriting will be done by Gwyneth Hughes (who did the recent adaptation of Thackeray’s Vanity Fair.) The novel is an unusual one; it’s an historical mystery set in ancient Egypt!

Update: Death Comes As The End has not yet released in the U.S.

Curious to see what classic books were made into movies last year? Check out this post. And here are 7 underrated classic novels that NEED a new movie remake, in this author’s ardent opinion. 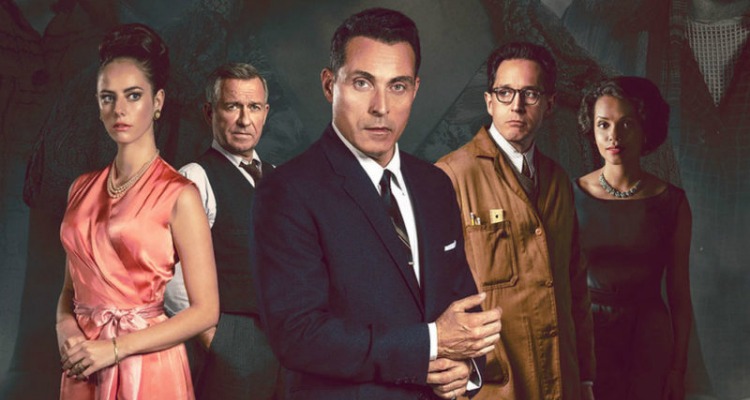