Want to find out what classic book-to-movie adaptations are coming out in 2019? Check out this list of classic books becoming movies and TV miniseries for the big screen, Amazon, Netflix, and the BBC. 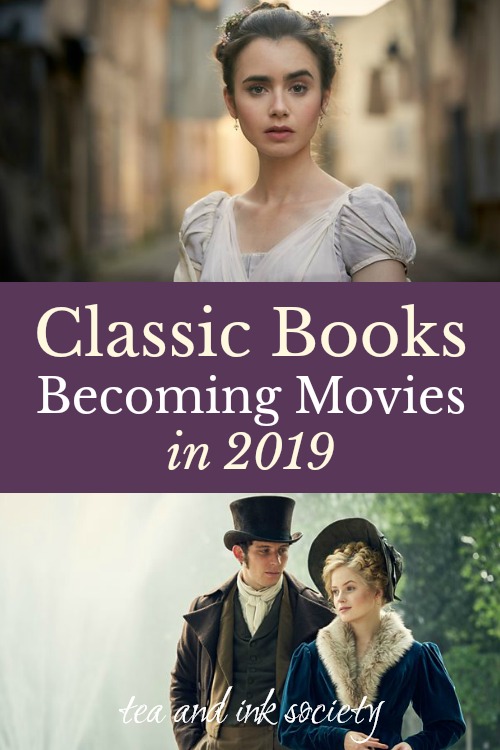 I get excited when I hear that a classic book is getting a film adaptation. Sometimes they turn out great (like this and this), and other times they fall short. But the anticipation is always pleasant. I love to see the books I’ve read brought to life, and I’m always most satisfied when the movie follows the book as closely as possible.

How well do the filmmakers understand the author? How well will they respect the reader-turned-viewer? This year, we’re about to find out with 17+ book-to-film adaptations of classic novels.

Updated October 30, 2021: I’ve made updates in red to note where you can watch these, or if there is new information about them. Pin this post so you can save it for later!

Look for the following new movies based on classic novels to hit the big screen:

This could be fun, but I think most Nancy Drew fans will wish this had a vintage setting and was the start of a miniseries instead of a movie. Which could actually be coming our way, since the CW network owns the rights to the books and is currently working on a series!!

Here’s the trailer for the new movie:

Nancy Drew and the Hidden Staircase isn’t available on Netflix in the U.S. or on Amazon Prime, but the DVD can be purchased here. Meanwhile, the CW Network’s Nancy Drew TV series now has three seasons. Their take is a modern-day, supernatural mystery series aimed at older teens and adults.

Note: In case you missed it, here’s my post on 11 things Nancy Drew taught me about life.

There’s a reason Lousia May Alcott’s classic is getting so many remakes lately–2018 was the novel’s 150th anniversary! The BBC released their miniseries in spring of 2018 (I reviewed it here), and the classic got a modern retelling later that year. This year’s period piece is directed by Greta Gerwig and stars Saoirse Ronan (Jo), Emma Watson (Meg), and Meryl Streep (Aunt March).

Although not my favourite, this is a lovely adaptation and I definitely recommend it! You can buy the DVD, or stream with STARZ on Amazon.

Andrew Lloyd Weber’s musical is being turned into a movie, but his original source material was Old Possum’s Book of Practical Cats, a collection of poems by T. S. Eliot. Here’s the official Cats trailer:

CATS is available to stream here, or get on DVD here.

Like Little Women, this is another major classic that hasn’t gotten a big-screen remake since the 90s. This version of Francis Hodgson Burnett’s novel will star Colin Firth as Mr. Craven. They’ve changed the time period from early 1900s, as it is in the book, to post World War II.

The Secret Garden is available to stream on Hulu. The DVD can be found here.

The Personal History of David Copperfield

Dickens’s favourite novel is getting a big-screen adaptation this year, with a cast that includes Dev Patel, Tilda Swinton, and Hugh Laurie.

The Personal History of David Copperfield is available for streaming on Hulu, and on DVD here.

Charlie and the Chocolate Factory

Paul King (of the recent Paddington movies), is directing a film version based on Roald Dahl’s 1964 children’s classic. It might not exactly be a book adaptation, though…sounds like going to be more of a prequel story with background on Wonka and the Oompa-Loompas.

This film was pushed back to 2023, and there still aren’t many details about it! Here’s the IMDb page. Timothée Chalamet (who played Laurie in the 2019 Little Women), will be Willy Wonka. 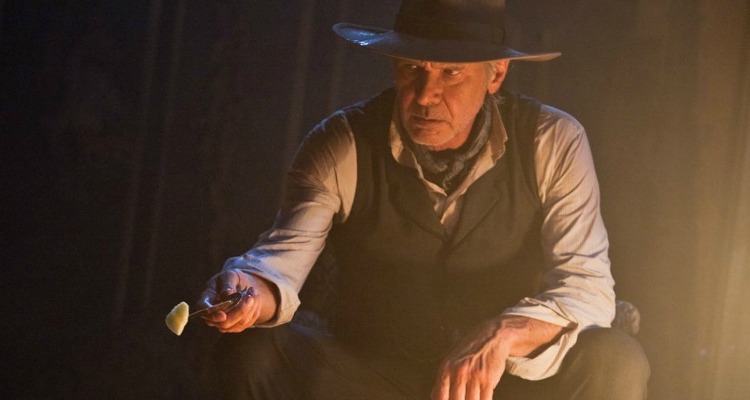 Call of the Wild

Jack London’s 1903 adventure novel is about a dog who is stolen from his home to become a sled dog in the harsh conditions of the Yukon. The upcoming film adaptation has a promising cast, including Harrison Ford, Dan Stevens, and Karen Gillan.

Call of the Wild is on HBO Max. Get the DVD here.

This famous novel by George Orwell will be getting a movie soon. Paul Greengass, who directed three of the Bourne films, is directing.

Note: Megan listed this in her Books That Make You Think post.

A big-screen adaptation of Sylvia Plath’s novel has been in the works for awhile now. It looks like it will be released this year or next, but I can’t find a definite date. It will be Kirsten Dunst’s first directorial feature.

Update 1/29/2020: No release date for this yet, but we know that Kirsten Dunst is no longer directing. And apparently it will be a television series instead.

Witness for the Prosecution

Ben Affleck is directing and starring in this adaptation of a short story and play by Agatha Christie. Christie’s detective Poirot isn’t featured in this, so you don’t have to wonder whether Affleck is right for the role!

Check out Netflix, Amazon Prime, and BBC/Masterpiece for these upcoming book-to-TV adaptations! Note that for some BBC productions, you can watch episodes for free on the Masterpiece website, but only for a limited time.

This Agatha Christie adaptation was released in the U.S. on Amazon Prime earlier this year. John Malkovich stars as a controversial Poirot. I haven’t seen the miniseries, but I hear it’s a bit gruesome in parts. I’m no Malkovich fan, so I might give this one a pass.

Here’s the trailer if you’re curious:

Many BBC period drama aficionados know Andrew Davies for his work on Pride and Prejudice (1995), Wives and Daughters, Sense and Sensibility, and countless other miniseries. Now he’ll be screenwriting for a new adaptation of Victor Hugo’s massive novel. It will be a six-part series and promises to be a faithful adaptation. (The picture at the top of this page has scenes from Les Mis.)

I watched this when it came out and it is excellent! I haven’t read the book, I’m afraid, but I love this story and all three film adaptations of it that I’ve seen so far! (This, the Hugh Jackman one, and the Liam Neeson). Here’s the BBC version on DVD.

Apparently, the BBC is getting ready to release another run of Charles Dickens adaptations! The first in this series will be A Christmas Carol, with Stephen Knight directing and Ridley Scott and Tom Hardy producing. There will be 3 60-minute episodes.

A Christmas Carol is available to stream now on FX. It can also be purchased for streaming on Amazon.

Mark Gatiss and Steven Moffat are bringing Bram Stoker’s Gothic novel to the screen sometime in late 2019 or early 2020. Although the two reworked Sherlock Holmes in a modern setting, Dracula will (mostly) be a period piece! There will be 3 episodes, 90 minutes each as a collaboration between Netflix and the BBC.

Although Dracula is one of my favourite Victorian novels, mentioned in my Gothic novels post and my Gryffindor House reading list, I found this adaptation to be a disappointment. There’s major changes to the book, and the horror is either campy or downright disgusting.

George Orwell’s allegorical novel hasn’t been filmed much, but Andy Serkis (aka Gollum) is going to give it a try. The movie will be released as a Netflix original, probably sometime in 2019.

Death Comes As the End

Agatha Christie’s mystery novel will be made into a 3-part BBC miniseries, released sometime this year. It’s an interesting Christie novel to adapt, because instead of playing out in English country houses it’s set in ancient Egypt!

The Chronicles of Narnia

Netflix now has the rights to adapt all seven novels in C. S. Lewis’s fantasy series. They have plans to make a “Narnia universe” using both feature films and TV series, and may release the first this year. I’m keeping my expectations safely low, but I’d love to be pleasantly surprised.

Which of the above titles are you most looking forward to? I’m most interested in The Secret Garden, Little Women, and Dracula. Most nervous about Dracula.

If you need a good period movie to watch NOW, without waiting for one of these, check out my list of 20 excellent period films. I’ve also got a complete guide to Anne of Green Gables film adaptations, which can be found here. And if you’d like to see 7 underrated classics that should be made into movies, head here! 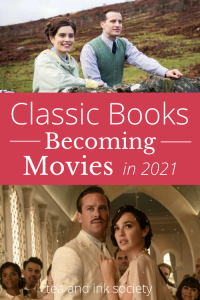