The summer Seasonal Reading Box ships out June 15! Click to reserve a box!

Wondering what books are going to become movies in 2022? I’ve rounded up all the classic books that are getting made into TV shows and movies in 2022, with trailers and release dates. All of these are upcoming period dramas for 2022; not modern-day settings.

We’ve got a good lineup of classic literature getting adapted for movies and television in the year ahead! Reading about the production updates on these upcoming adaptations, I’m cautiously optimistic that the film industry is recovering from the pandemic doldrums. (Also, I’m getting tired of promising Death on the Nile every year when nothing comes of it!)

Even though some don’t have release dates set, these are the book-to-film adaptations that are actually slated to come out in 2022. This year, the filmmaking industry is drawing on three centuries worth of classic literature to create new movies and TV series spanning every genre from adventure to fantasy to thriller.

Bring the popcorn and let’s see if these movies live up to their book counterparts.

Read these books to get ready for the upcoming film versions!

Around the World in 80 Days is one of the many miniseries and movies that got pushed back due to the pandemic. But we won’t have to wait much longer! The BBC is giving Jules Verne’s classic the royal treatment, telling the story across eight weekly episodes beginning January 2. Hopefully it will be available to stream for free online on the Masterpiece PBS website (usually they put the free episodes up for a limited time). David Tennant (from Good Omens and Doctor Who) will play the part of protagonist Phileas Fogg.

Around the World in 80 Days 2022 Official Trailer:

2. All Creatures Great and Small by James Herriot – January 9

This TV series adaptation of the beloved short stories by James Herriot will be returning for a second season! I loved Season 1; I haven’t heard of anyone who saw it and didn’t love it! Set in the scenic Yorkshire dales of northern England, this is a comfortable story to curl up with for non-stressful TV watching.

Patricia Highsmith’s 1957 psychological thriller Deep Water is getting a big-screen release staring Ben Affleck and Ana de Armas. Although Highsmith’s Mr. Ripley novels have been adapted for film several times, and her debut novel Strangers on a Train was famously adapted by Alfred Hitchcock, this will be the first English language adaptation for Deep Water. In the story, the Van Allens are an unhappy couple, but to avoid divorce they agree to an open marriage: Mrs. Van Allen can have as many affairs as she likes, provided she doesn’t desert her family. They maintain this façade well enough…until Mrs. Van Allen’s lovers begin to disappear, and Mr. Allen is the prime suspect.

4. Death on the Nile by Agatha Christie – February 11

Director Kenneth Branagh’s first Hercule Poirot feature, Murder on the Orient Express, came out in 2017. We’ve been waiting patiently ever since for the follow up, and after many delays it looks like we might finally see Death on the Nile in early 2022! Branagh has plans to adapt more of Agatha Christie’s mystery novels…let’s just hope there’s not such a long gap between them! Death on the Nile sees the famous Belgian detective on a Nile cruise (for vacation, of course). But when a murder occurs on board, Poirot can’t help but investigate.

Death on the Nile 2022 Official Trailer:

Based on the lighthearted 1958 novel, this tells the story of Mrs. Harris, a London cleaning lady who falls in love with her employer’s lavish wardrobe. Mrs. Harris determines to go to Paris to buy a Dior gown of her own; adventures ensue. Directed by Anthony Fabian and starring Lesley Manville.

The upcoming Lord of the Rings will be an Amazon original TV series, available to stream on Amazon Prime Video. They’re being very secretive about it so far, but so far we know that it will include material from The Silmarillion rather than being a straight-up remake of the main trilogy. We know that the Tolkien estate is more involved with this series than past Lord of the Rings projects. And we know that with a $465 million budget for Season 1 alone, it’s the most expensive TV show ever made.

Get Lord of the Rings
Get The Silmarillion

7. Across the River and Into the Trees by Ernest Hemingway – release TBA

Based on Hemingway’s last full-length novel, this tells the story of a U.S. Army officer in Italy reliving his experiences in both World Wars. Directed by Paula Ortiz, starring Liev Schreiber.

8. All Quiet on the Western Front by Erich Maria Remarque- release TBA

Netflix is producing this big-budget adaptation of Erich Maria Remarque’s 1929 anti-war novel. Daniel Brühl (whom you might know as Zemo in the Marvel cinematic universe) will star, with Edward Berger directing.

Waugh’s 1945 classic about a wealthy Catholic family during the interwar period in England is coming to our screens again sometime in 2022. This will be a TV series produced by the BBC and HBO Max, starring Andrew Garfield as Charles Ryder, Joe Alwyn as Sebastian Flyte, Rooney Mara as Julia, and Ralph Fiennes and Cate Blanchett as Lord and Lady Marchmain.

Writer Steven Knight will be making his second Dickens adaptation for the BBC next year. His dark, gritty version of A Christmas Carol (which seems a little bit of an oxymoron) was well-received by critics, so he and collaborators Ridley Scott and Tom Hardy are excited to move forward with this next Dickens installment. Great Expectations will be a miniseries, featuring six hour-long episodes.

Austen’s last completed novel is finally getting a new film adaptation, which will hit Netflix sometime in 2022. It’s advertised as a “modern, witty approach” (but still period setting) with color-blind casting. As it was for Emma‘s director Autumn de Wilde, this will be the first feature film for director Carrie Cracknell. Dakota Johnson stars as Anne Elliot, with Cosmo Jarvis as Captain Wentworth.

No, this is not a typo. There’s not one but two Persuasion film adaptions in the works! (And in 2020 there was a poorly-rated modern retelling to boot!) Kind of like when everyone decided to re-adapt Anne of Green Gables or Little Women all at the same time. This version’s Anne Elliot will be played by Sarah Snook, with Joel Fry as Captain Wentworth, and Mahalia Belo directing.

Based on the 1883 Italian novel, this movie isn’t going to follow the trend of live-action remakes. Rather, it will be a stop-motion animated film headed by Guillermo del Toro (so expect the book’s darker elements to stay)! This is a passion project for del Toro, who says he’s wanted to make this movie for as long as he can remember. Watch for it on Netflix. (Disney is also planning on making a new Pinocchio movie at some point, but this isn’t it.)

The BBC is making a miniseries adaptation of Fielding’s 18th-century comic novel. Look for it to stream on the Masterpiece/PBS website sometime in 2022. I wouldn’t count on watching this with the kids, though; Fielding’s classic is what you would call a “bawdy romp.”

15. Why Didn’t They Ask Evans? by Agatha Christie – release TBA

This three-part limited series will air on BritBox in the U.S. and Canada. It’s directed by the universally-loved Hugh Laurie, who says “I loved this book as a nipper and still do.” Why Didn’t They Ask Evans is one of Christie’s standalone mysteries; it features two amateur detectives, rather than Christie’s main sleuths Miss Marple or Hercule Poirot. In the story, Bobby Jones goes in search of an errant golf ball, and instead discovers a dying man who manages to ask the cryptic question of the book’s title as his last words. Bobby teams up with his friend Lady Frances “Frankie” to discover the truth about the man’s death and the mysterious Evans. Actors Will Poulter and Lucy Boynton will play the parts of Bobby and Frankie.

Which of these upcoming book-to-movie adaptations are you most eager to watch? The ones I’m most excited about are The Lord of the Rings, both upcoming versions of Persuasion (especially the Sarah Snook one), Death on the Nile, and Why Didn’t They Ask Evans? Yes, I realise that’s about half the list!

More Classic Books Made Into Movies

I’ve been doing this roundup of books to movies for the past three years! Here are the lists from years past, if you want to see what you may have missed. (In fact, some of these book-to-film adaptations got pushed back or stalled, so we’re still waiting on some of them!) 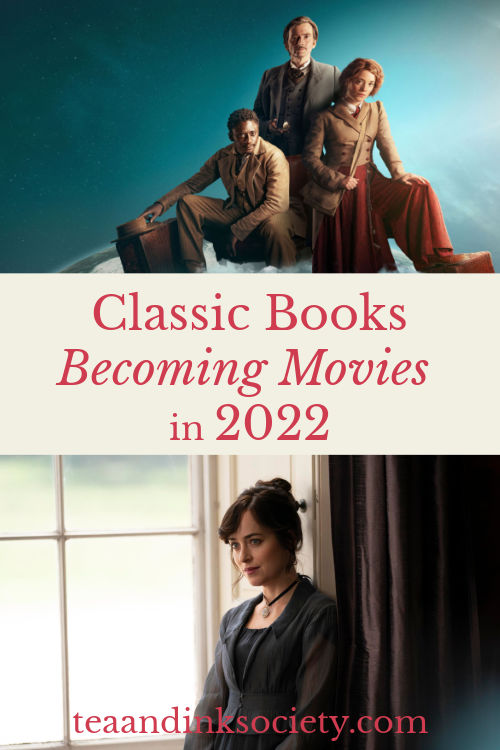