Since its publication in 1922, Elizabeth Von Arnim’s novel The Enchanted April has cast its spell over thousands of readers. Yet this charming novel has only been adapted for the screen twice in the last hundred years! In anticipation of the book’s upcoming centennial, I’m calling for a movie remake of The Enchanted April…and I’ve even come up with a cast, to make Hollywood’s job easier.

We bookworms and lovers of classic lit know that there’s a huge market for more films in this vein: for lush period settings and costumes, timeless storylines, and iconic characters. We want more!

The thing is, I’m not sure if most filmmakers get it. They know audiences will watch a ubiquitous classic like Little Women or Anne of Green Gables, but they don’t seem to realise that Alcott and Montgomery have a lot more in their backlist–and that fans want to see those on the screen, too.

(Well, perhaps if they read more blogs like Tea and Ink Society they would realise just how many lovely, dramatic, powerful stories remain untapped in the realm of classic literature.)

While we’re waiting for filmmakers to “discover” these books, it can be great fun to come up with our own suggestions for classic book-to-film adaptations, along with dream casts. As I was re-reading The Enchanted April, which was the featured book in the spring Seasonal Reading Box, I kept thinking about how beautiful it could look in an updated film. And what a sparkling cast you could assemble!

The story features four Englishwomen–formerly strangers–who split the rent for an Italian villa during the month of April. They’re each miserable in their own way when the story starts, but as San Salvatore works its magic they blossom one by one into the best version of themselves.

Now, use your imagination for a bit and let’s see if we can picture this story played out on the big screen by some of today’s talented actors!

If The Enchanted April were made into a new film adaptation, director Autumn de Wilde should be at the helm. She directed 2020’s EMMA., and I can see many similarities between that film and a potential Enchanted April remake. There’s the gorgeous, floral-filled visuals; humor on a spectrum of sly and subtle to laugh-out-loud; eccentric personalities and gentle character growth.

Here’s how I would cast each of the main characters from Von Arnim’s novel:

Rose is described as being calm, gentle, and serious, and Claire Foy can pull off this manner perfectly. Rose is also introverted and introspective, and I think Claire Foy can excellently portray someone with an inner monologue. Rose has a bit of fire in her, too, though, which we see with her passive-aggressive behavior towards Mrs. Fisher. Foy could pull off this polite but assertive stance. Runner-up idea: Bonnie Wright.

In the book Lotty (I mean, Mrs. Wilkins, as she’s known before coming to San Salvatore) starts out very timid. Carey Mulligan can capture this shyness and innocence.

And then after she arrives at San Salvatore, Lotty becomes “washed through with light,” and her natural spunk and playfulness shine out. Carrie Mulligan can nail this, too, with that hint of a smile that always seems to play around her face and eyes. And at 5’7″ she would seem tall to Claire Foy’s 5’4″, which would fit the book.

Lady Caroline is supposed to be young, aristocratic, and stunningly beautiful. Lotty and Rose are described as pretty, especially once they get to San Salvatore–but Caroline isn’t just pretty, she’s exquisite. Anya Taylor-Joy looks the part with her finely-delineated features. At 25, she’s the right age (Lady Caroline is 28). And we already saw in EMMA. that Taylor-Joy can play the part of a privileged rich girl who comes to terms with her own flaws.

Other period dramas you might’ve seen Anya Taylor-Joy in: The Queen’s Gambit, EMMA., The Miniaturist

The key here is to find someone who could believably act the part of a straight-laced Mr. Wilkins while wearing nothing but a towel. I’m not being inappropriate here–you’ll know, if you’ve read the book–it’s a must that the actor be able to carry the humor of the bathtub scene!

Samuel West has that look about him of someone who thinks highly of himself and his profession, as does Mr. Wilkins.

Because Arbuthnot’s physique is important to the story, I wanted to get this aspect right with my casting choice. The role calls for someone with a fuller face and build–not someone with slender or pointy features! In the book Arbuthnot is a bit of a celebrity as a writer of sensation novels, but has a dormant tender side, too. Richard Harrington could cover the scope of this role well. Runner-up idea: Allen Leech.

Rich but lonely, Thomas Briggs owns the Italian villa yet still searches for a sense of home. And Eddie Redmayne can capture his sense of eagerness and idealism, as well as the courtesy (or infatuation) he displays towards the women. Runner-up idea: Tom Hiddleston (I know we think of him as Loki nowadays, but Hiddleston has many period dramas to his name, too!).

Other period dramas you might’ve seen Eddie Redmayne in: Les Misérables, The Theory of Everything, Fantastic Beasts and Where to Find Them, Tess of the D’Ubervilles

Mrs. Fisher seems like a crusty old lady, so I instantly thought of Maggie Smith or Judi Dench or Eileen Atkins, since they’ve all played to the type before. But the truth is, these ladies are too old for the role now, if you want to be true to the book’s timeline. Mrs. Fisher is actually only 65.

So, I went searching for an actress that could still capture the crotchetiness, the dry humor, and eventually the motherliness of the role, and came up with a perfect fit–Julie Walters!

Thanks for joining me on this imaginary casting journey of The Enchanted April! Let’s hope someone from the filmmaking industry was listening in(;

P.S. The BBC North and South needs a remake, too. Perhaps I should try my hand at casting that next! 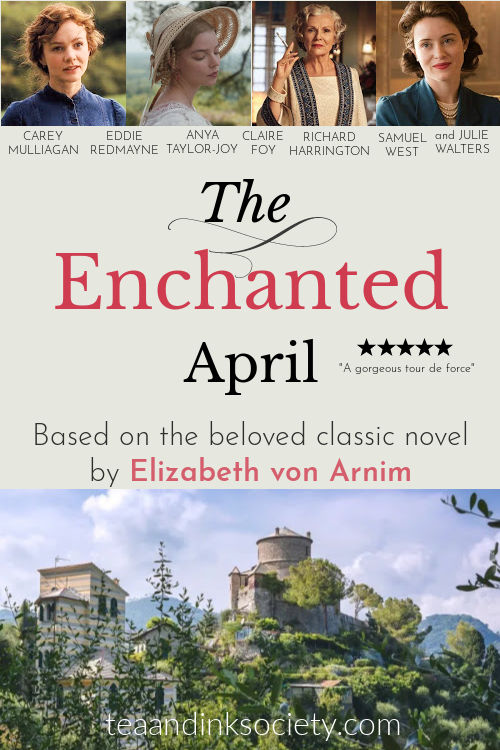