Do you long for a simpler, old-fashioned holiday season? Here’s how to have a Little Women Christmas as Louisa May Alcott portrays it in her beloved novel. 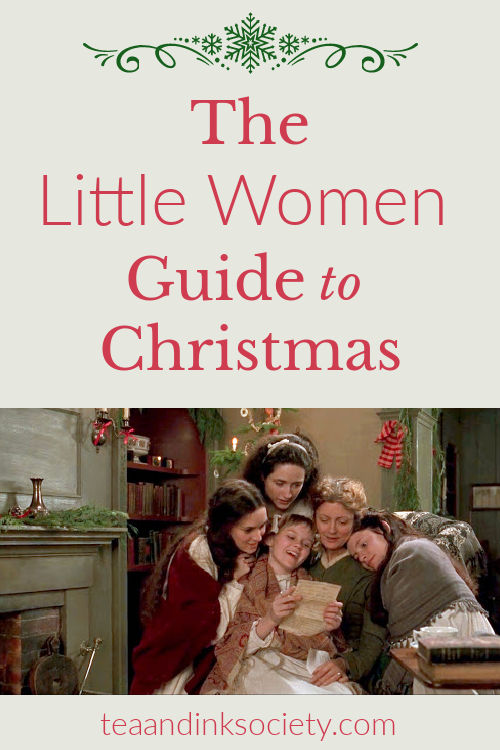 Have Yourself a Merry Little Women Christmas!

Because the first volume of Little Women begins and ends with Christmas, the novel is often considered a Christmas story. The movie versions have helped to solidify the Christmas connection, especially the 1994 adaptation, with its many snow scenes and its attention to detail in the Christmas sets and props.

The Christmases of Little Women are a unique glimpse into the American Christmas scene through the eyes of Louisa May Alcott, who sets the story in the early 1860s during the Civil War. Across the pond, Charles Dickens had already done his part to establish the Victorian Christmas as we know it. His writing inspired Alcott, who wrote a number of short Christmas stories, including a children’s retelling of A Christmas Carol.

There’s something very appealing about the old-fashioned Christmas portrayed in Alcott’s novels and short stories. The warm glow of nostalgia puts a patina on the past that makes her New England holidays seem simpler, more homey, and more genuinely festive. But sentimentality aside, I think in many ways, they were. 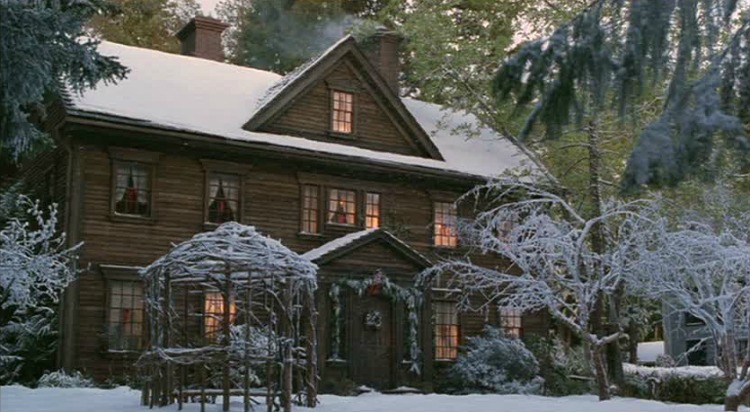 It was certainly easier for Christmases of a hundred years ago to be simpler. The holidays didn’t have to compete with the standards and consumerist messages of TV and ubiquitous advertising.

Our culture has done a pretty good job of turning the holidays into a consumerist frenzy, and unfortunately we’ve gone right along with it. Christmases today are driven by cash (or credit) and numbing busyness. And taking a different approach feels like pushing through a snowdrift in the middle of a blizzard.

So what makes an old-fashioned Christmas à la Alcott different (and better)?

In Alcott’s stories, Christmas cheer is fueled by gathering with family and friends for simple rituals like eating, decorating, and singing together; and spreading the cheer of your own hearth with those less fortunate.

Now, that’s what we’d like to think our Christmases are about today, but are they really? If the season has become too complicated for you, perhaps it’s time to read those Christmas chapters from Little Women again.

Here are four ways to celebrate Christmas like Little Women this year:

Note: All quotations are taken from the book Little Women by Louisa May Alcott. (Of course!)

“And when they went away, leaving comfort behind, I think there were not in all the city four merrier people than the hungry little girls who gave away their breakfasts and contented themselves with bread and milk on Christmas morning.”

When the novel opens in the March family drawing room, the “little women” of the story are anything but angelic. They grumble about being too poor to celebrate Christmas properly, and each sister in turn complains about her lot in life. But the girls’ initial self-centered attitudes change in response to Marmee’s selfless love. They decide to spend their allowance money to buy gifts for her, and later at her request give up their own Christmas breakfast to the needy Hummel family. 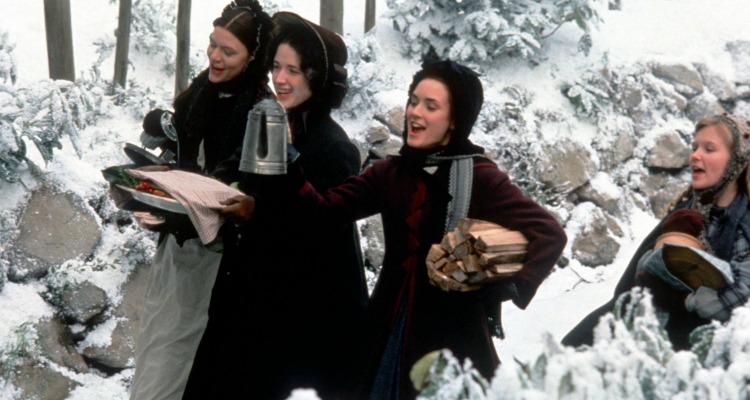 Mrs. Hummel calls the girls “good angels,” which they find laughable. But the truth is, by their lavish generosity they’ve become messengers of peace and goodwill–and their own Christmas celebrations are more joyful as a result.

2. Make your own entertainment

“Being still too young to go often to the theater, and not rich enough to afford any great outlay for private performances, the girls put their wits to work, and necessity being the mother of invention, made whatever they needed.”

Though expensive outings can be fun, the March sisters demonstrate that you can just as well enjoy holiday entertainment of the homemade variety. The girls put together an elaborate theatrical production for their friends which provides hours of fun beforehand during the preparations, and a very merry evening for everyone on Christmas Day.

There’s nothing impersonal about the gifts that the March family exchange. In the opening Christmas, Marmee gives each of her daughters a copy of Pilgrim’s Progress, bound in their favourite colour. It’s a meaningful gift as Marmee uses the story to encourage the girls through a difficult season. At the same time, the gift demonstrates Marmee’s confidence in them that they can indeed overcome their obstacles.

The sisters each choose something for Marmee that has particular significance for them. Meg gives her “a nice pair of gloves” (something she’d like herself). Jo’s present is “Army shoes, best to be had,” reminiscent of her own desire to fight in the war. Beth gives “Some handkerchiefs, all hemmed,” even though the work is difficult for her. Amy intends to give “a little bottle of cologne” so that she can save some money to buy something for herself, but later spends all her money on a “handsome flask.”

The following Christmas the girls each receive something they greatly desire. They’ve had to wait patiently for it, but the waiting makes them treasure their presents all the more.

4. Take joy in simply being together

“Now and then, in this workaday world, things do happen in the delightful storybook fashion, and what a comfort it is. Half an hour after everyone had said they were so happy they could only hold one drop more, the drop came.”

The best possible Christmas present for the Marches comes when Father returns from the war at the end of the first book. In spite of being able to afford a more abundant Christmas that year, their greatest happiness is once again found in the pleasure of each other’s company. The family enjoys long conversations, sharing meals, and gathering around the piano to sing. It doesn’t get much simpler than that, but for the March family, it’s perfect. 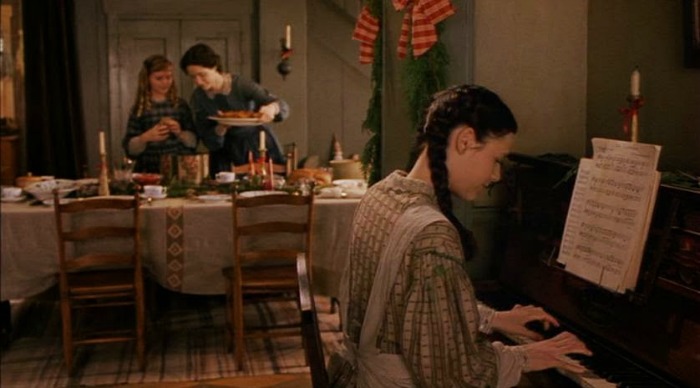 In the end, it’s not the circumstantial foods, period customs, or Victorian decorations that make the Christmases in Little Women poignant and memorable. The way the March family celebrates Christmas in the 1800s can be the way we celebrate it today: simply, with a genuine festivity that’s fueled by love and gratitude rather than marketing campaigns and stressful to-do lists.

What do you love about Christmas in Little Women?

Since Little Women is one of my favourite books, I’ve written a few blog posts on the story!

P.S. Don’t yet own a copy of Little Women? This edition looks gorgeous! 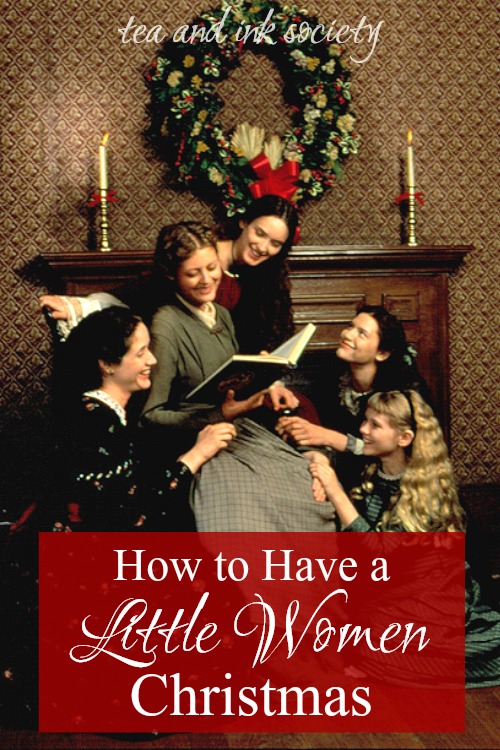