How many of these Southern fiction classics have you read? These bestselling Southern novels and short stories will challenge and inspire as they transport you to the American South. You’ll find a range of styles here from Southern gothic to Southern humor books, all written by best-selling Southern authors, both old and new. 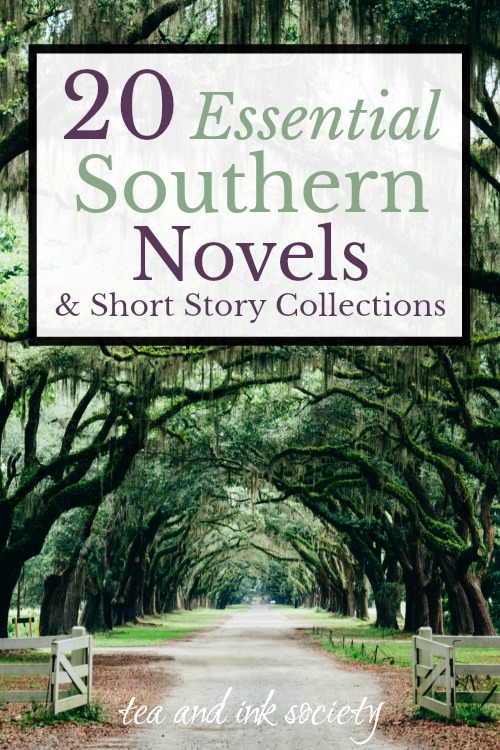 If you want to better understand an era, a place, or a people, read its literature. I have a deep love for the American South, and a respect for its rich literary history. It’s only natural: I grew up in Savannah, Georgia, and live in Alabama now. One of my reading goals is to become better acquainted with the literature of my homeland, and to that end I’ve created a Southern Fiction Reading Challenge.

This reading challenge is the culmination of hours of research and reading, and I’m excited to pass it on to you now! It includes some of my favourite Southern writers, as well as new-to-me books I want to read in order to round out my knowledge of Southern fiction. Each of the books on this list achieved bestseller status.

Southern literature is heavily driven by characters and place–sometimes even more than plot. You’ll find recurring themes of family, poverty vs old money, racism, class, and home. For this Southern fiction reading challenge, I’ve also made the stipulation that the books are written by Southern authors.

Southern fiction can range from humorous and cozy to raw and unsettling, and you’ll find all types listed below. All of them will make you feel and see the American South, transporting you from The Civil War to hurricane Katrina, from the hills of Kentucky to the swamps of Florida, and everything in between. They’re given below in chronological order of when they were written. I’ve included books by classic Southern authors as well as contemporary Southern writers. And you’ll find a checklist of all the titles at the end of the post!

1. The Adventures of Huckleberry Finn by Mark Twain (1884)

This book gets to head the list, as many people cite Huckleberry Finn as one of the most influential Southern novels. It’s a humorous but also poignant odyssey of two runaway boys on the Mississippi River.

Set in and around New Orleans at the end of the 19th century, this novella shows us the inner life and thoughts of Edna Pontellier. Mrs. Pontellier is wealthy. She’s a wife and a mother. But she is also dissatisfied. As she explores what she wants in life–independence, solitude, love–she feels increasingly stifled by convention. Through her heroine, Chopin takes the reader on a journey that’s both lyrical and tragic.

You simply can’t have a list of Southern fiction classics and not include Faulkner. Faulkner employs a stream-of-consciousness style that some find obtuse, plus unannounced switches between time and place. You have to work a bit to get into the rhythm of his writing, but it makes for a unique reading experience. And how often can you say that about a book? Probably you’ve read many unique stories, but how often is the reading experience unique in itself?

This particular Faulkner novel is about the demise of the old-South Compton family, told from the viewpoint of three of the Compton brothers.

Margaret Mitchell only wrote one novel published during her lifetime: the 1,000+ page epic Gone with the Wind. It became one of the bestselling novels of all time. It follows the story of an anti-heroine, the rich and spoiled Scarlett O’Hara, during the Civil War and the Reconstruction era.

Welty’s short stories capture Southern landscapes and Southern peoples with a broad range of voices and temperaments. She frequently draws on mythology to explore universal themes and truths for her characters. Reading Welty is a gentler, more charming experience than reading Flannery O’Connor, but there is plenty of depth and poignancy in her stories that make her a treasured author among her loyal readership.

6. Their Eyes Were Watching God by Zora Neale Hurston (1937)

This engrossing and uplifting novel tells the story of African-American Janie Crawford as she tries to make a life for herself through changing circumstances and changing husbands. It’s set in central and south Florida.

This short story collection is well loved by fans of Flannery O’Connor’s memorable characters and dark humor. With their often heavy or bleak subject matter, her stories aren’t always easy to read. But they’re worth reading. O’Connor draws on her Catholic beliefs to weave redemption and grace into her narratives.

Like Margaret Mitchell, Harper Lee only had one novel published. Her Southern classic is the coming-of-age story of Scout Finch, who comes to grips with the conventions and prejudices of her small Alabama hometown.

New Orleans native Binx Bolling is more interested in the movies he frequents than in his own disillusioned existence. But during the week of Mardi Gras just before his thirtieth birthday, he begins a self-appointed philosophical quest for the meaning of life. Percy’s novel is insightful, humorous, and still finding fresh relevance sixty years later.

Christy tells the story of an idealistic 19-year-old who leaves her home in Asheville, North Carolina to teach school in the Appalachian highlands. What she finds there will change her worldview—and her heart—forever. This beautiful and uplifting novel is one of my favourite books!

This Southern YA classic book takes us to Arkansas during World War II. Twelve-year-old Patty befriends a German soldier who’s being held as a POW at a camp in her small town. This might seem unusual in itself, but there’s more: Patty is Jewish. (Note- there’s also a sequel to this book called Morning Is a Long Time Coming.)

Eugenia Price is known for her meticulously-researched Southern historical romances that play out in the coastal South of Georgia and Florida. Her Savannah quartet is perhaps the most famous, and tells a sweeping family saga set in the decades around the Civil War.

Told through the eyes of 14-year-old Will Tweedy, this novel depicts life in a small Georgia town during the turn of the century. The book has been described as warm and humorous; if you’re not into dark Southern fiction, pick this one up instead!

Readers love Pat Conroy for his evocation of the South Carolina Low Country, his gorgeous prose, and his sweeping (often heart-wrenching) dramas. In this one, protagonist Tom Wingo travels to New York to meet with his sister’s psychiatrist, who’s trying to guide her to healing after a suicide attempt. Tom unfolds the story of the Wingo family’s past–and it’s clear that his sister isn’t the only one who needs healing.

Slipping back and forth between the decades spanning the 1920s and the 1980s, this novel weaves the lives of four women with stories from a small café in Alabama. This novel gets praised for being endearing and heartwarming (plus, you can actually visit the real café and town that Whistle Stop was based on!)

The title of this book makes it sound like a memoir, but it’s fictional. It’s the first-person account of spunky 99-year-old Lucy Marsden. She lives in a nursing home now, but has plenty of stories to tell about being the young wife of a Civil War vet, and about the triumphs and hardships of life in the post-war South.

Fourteen-year-old Lilly Owens barely knew her mother–and her father is toxic to live with. The only one who seems to truly love Lilly is Rosaleen, her black nanny. Rosaleen and Lilly run away together, eventually finding a haven with three bee-keeping sisters in a town that may hold the key to Lilly’s mother.

Wendell Berry is the author of eight novels that take place in the fictional rural town of Port William, Kentucky. Hannah Coulter is the seventh published, but they can be read in any order. Berry’s novels celebrate a love for the land, for community, and for a simple and reverent view of life. I picked Hannah Coulter for this list because of the female narrator and her perspective of looking back on life as an older woman.

It’s Jackson, Mississippi in 1962. Three women set out to write a book about what it’s like to be a black maid working in white Southern households. The Help is both moving and entertaining, offering a believable glimpse into a not-so-distant era of our past.

Hurricane Katrina is gathering force in the Gulf, but the storm is only one of the problems Esch’s family has to face. Ward gives us a novel and a family steeped in harsh realities but also shot through with hope. A new author who’s already won numerous awards, she’s been called a modern-day Faulkner and is certainly one to watch.

What are your favourite books set in the South? Which of these Southern novels have you read?

For more regional book lists that evoke other places and cultures, read these: