Here’s a book list for the lover of all things Scottish! These books set in Scotland will make you feel like you’re there, even if a trip to Scotland isn’t on your calendar this year. Add this Scottish reading list to your TBR, which includes classic Scottish novels as well as contemporary Scottish writers. 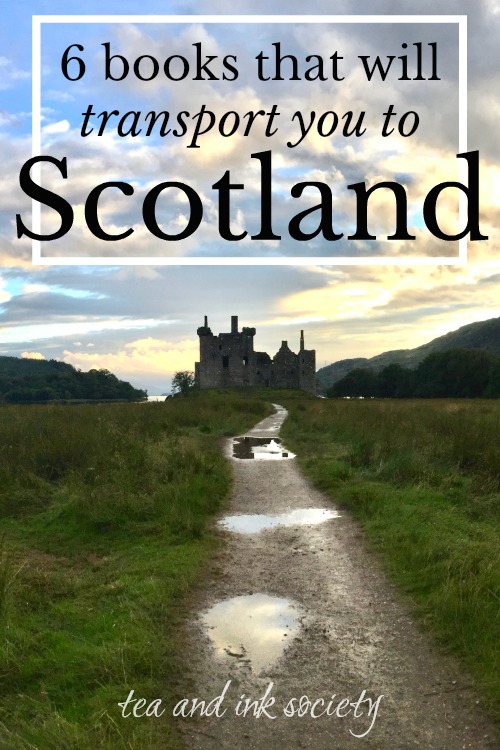 Scotland! The land of misty highlands and brooding hills, clear rivulets and blooming heather, dark dales and rocky shores, wild and beautiful, inhabited for thousands of years yet still struggling to rise above poverty and degradation. Many times invaded and desolated, yet a history of heroic deeds abounds. A culture of lore and stirring music unlike that of any other country in the world.

Scotland captured my heart at a young age. My sisters and I became obsessed with the history and music of Scotland and dreamed of exploring its rugged beauty. G. A. Henty’s In Freedom’s Cause opened our eyes to a struggle for independence not unlike our own American story; a story of tenacity and courage fueled by deep held principles of liberty. Stevenson’s Kidnapped took us on a journey through the highlands, the terror and beauty of a rugged country and the tragic fascination with Bonnie Prince Charlie.

About the same time, we started focusing on Celtic music in our own family band and fell in love with the stirring tunes and ballads. In the music we again met Bonnie Prince Charlie, Wallace and Bruce, the desolation of war with the English, the beauty of Scottish maids and an unexplainable love of a rugged and hard country. There was a time when I knew more about Scotland’s history than I did my own county’s story! 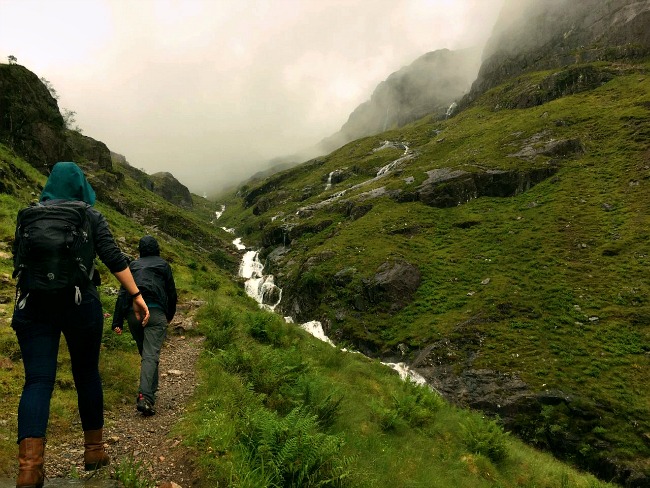 After years of playing Scottish music, performing at Highland Games and dreaming of climbing the munros, my sisters and I were finally able to visit Scotland last year. We rented an adorable cottage overlooking Loch Linne and a car for exploring the winding roads. We were just outside Glencoe, famous in legend and song for the tragic massacre of the McDonalds by English soldiers in 1692. Clouds are usually trapped in the glen between steep mountains, giving it a constant stormy and brooding appearance. And yes, it rains at least once, almost every day!

We climbed munros (mountains over 3000 feet high), visited the Battle of Bannockburn memorial, found the castle Archie Forbes was imprisoned in from In Freedom’s Cause, followed the trail of Davie and Alan from Kidnapped, day tripped to islands of Mull, Iona and Staffa, went “over the sea to Skye” as in the famous song and found the grave of Flora McDonald.

When you see the highlands in person, the emotions created by Scottish novels, legends, and music makes sense. The bleakness, the beauty, the rain and the clouds, the sheep on the hillsides, the ruined cottages and castles blend into one stirring song. This is the land where you truly would expect to find dragons around the next corner.

Here are a few suggestions of books that will help you take a journey of imagination to Scotland. 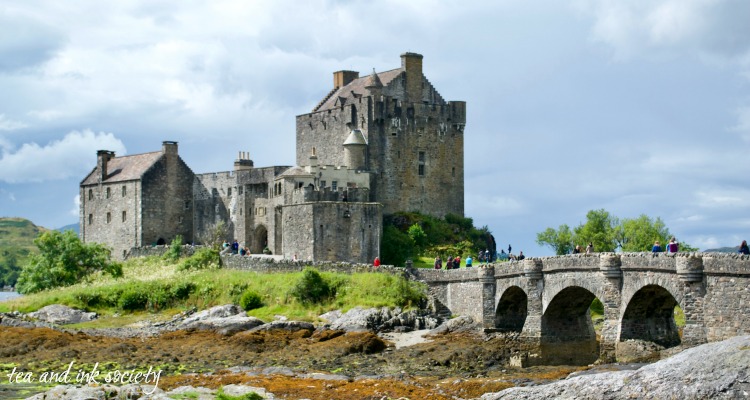 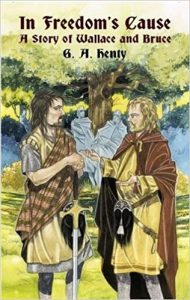 Archie Forbes falls in with William Wallace at a young age and is present for many of his famous adventures and battles. Through Archie’s eyes, we get a sweeping overview of the history of Scottish independence in the 1300s, the heroic but unsuccessful attempt by Wallace, the ups and downs of Robert the Bruce’s campaigns and the ultimate victory over the English at Bannockburn.

Henty can be very wordy at times and stray from the plot in an attempt to get chunks of history across, but readers are rewarded with a sweet romance and some exciting adventures and hair-breadth escapes. 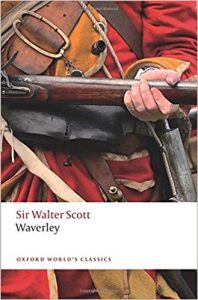 Jane Austen wrote: “Walter Scott has no business to write novels, especially good ones. It is not fair. He has Fame and Profit enough as a Poet, and should not be taking the bread out of other people’s mouths. I do not like him, and do not mean to like Waverley if I can help it but fear I must.”

In the early 1800s, novel writing in general was looked down upon as beneath the great authors and historical novels were relatively new and untested. Thus Scott used a pen name when he published the first Waverley novel in 1814. The novel was a smashing success and Scott ended up writing a whole series.

The original Waverley novel tells the story of Edward Waverley, a young English gentleman with a romantic turn of mind. He gets a commission in the Royal army and is stationed in Scotland. Tiring of the tedium of army life, Edward gets permission to visit the estate of a family friend nearby. There he’s introduced to the colorful characters and life of the people of Scotland. He gets swept into the drama of 1745 when he overstays his leave, is arrested for desertion and throws his lot in with the followers of Bonnie Prince Charlie.

Modern readers will probably find Scott rather tedious. He takes time to explain the historical background, the politics of the day, the motivations of the characters, details of everyday life and even explains where he got his ideas for the characters, places and events! As his first love was Scottish poetry, Scott liberally sprinkles his prose with songs of the highlands. Although I wasn’t drawn in to the novel upon a first read through, it was fun to see where so many other authors got their inspiration to write historical fiction. 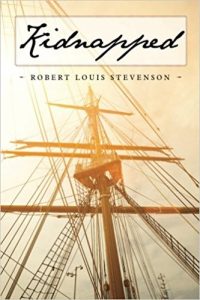 Upon the death of his father, young David Balfour is uprooted from his quiet life in the lowlands of Scotland and sent to his uncle to claim his inheritance. Davie soon realizes that his uncle is a cruel miser who would like nothing better than to see Davie dead. Despite Davie’s best precautions, his uncle manages to have him kidnapped by a ship captain who means to sell the boy into slavery in the Americas.

A major storm and subsequent wreck throw Davie into the companionship of Alan Breck Stuart, a fugitive from the failed “rebellion of ‘45” who is trying to keep contact between the clans still loyal to the exiled Stuart monarchs. Through countless adventures and hardships, Davie comes to love and respect the proud, stubborn highlander and the country he calls home.

Kidnapped is classic literature for good reason. It’s an entertaining story plus captures a time, place, and personality with stunning clarity. The sequel to Kidnapped is Catriona, published almost a decade after Stevenson’s original novel. Catriona doesn’t quite hold up to the original, but is still an enjoyable romp for those who love the characters introduced in Kidnapped. 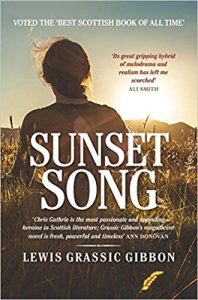 Often listed among the greatest of Scottish novels, Sunset Song tells the story of Chris Guthrie and the land that was so much a part of her. It digs into the poverty and bleakness of farming life in early 20th century Scotland, paints colorful pictures with the supporting characters and grips at your heart. Chris feels like there are two of her always striving together, one that loves and one that hates the farming life in Scotland.

“You hated the land and the course speak of the folk and learning was brave and fine one day; and the next you’d waken with the peewits crying across the hills, deep and deep, crying in the heart of you and the smell of the earth in your face, almost you’d cry for that, the beauty of it and the sweetness of the Scottish land and skies.”

Gibbons did an incredible job manipulating the structure of his English sentences to capture the rhythm and cadence of the Scots dialect. He sprinkles the prose with just enough Scottish words to give a sense of time and place without losing English readers. Although I loved Gibbon’s style, some of the plot points and subject matter were too dark and depressing for me to enjoy the novel. I just can’t stomach a whole novel about dysfunctional families; however, it is great writing and I’m certain many readers would love it.

Sunset Song is the first in a series that is often published together under the title A Scot’s Quair. 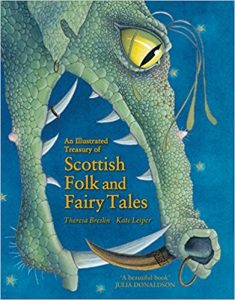 This beautiful book is like a cozy winter’s evening beside your grandma’s fire. Simple tales, set in Scotland, some with roots that go back thousands of years. It’s supposed to be for children, but adults will love it too. Each tale is beautiful typeset with illustrations. 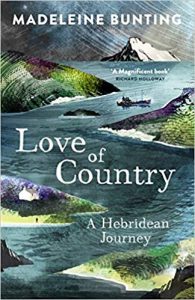 6. Love of Country by Madeleine Bunting

A travel memoir, a personal journey, a survey of history and politics, inspired by literature, Bunting’s book is rather hard to describe. She shares her love and longing for the North and the islands, something felt by generations of English and others from around the world. This longing led her on a series of visits to the Hebrides islands of Scotland. She muses on what she finds there, describes the scenery and people, and quotes from many writers of days gone by on how the islands took hold of their lives and souls.

The author’s feelings are filtered through her background and beliefs, so some of the book will resonate with readers and some probably won’t. I found it to be a delightful armchair travel guide through the Hebrides, and with each chapter abounding in so many literary quotes, I got some ideas of other books to add to my list!

Music is deeply entrenched in the culture of Scotland. While you’re reading one of these Scottish novels, download an album or search these artists on Spotify or iTunes.

Note from Elsie: Doesn’t Sarah’s Scotland trip sound amazing?? It would be lovely to pack one of these books when you visit someday! (I want to!) Sarah has some tips for planning your travel itinerary, once you’re ready to take the adventure.

My dad is a Scotophile and we have Scotch ancestry, so the stories and songs of Scotland were part of my childhood imagination, too! Besides some of the Scottish tales and music mentioned here, we also loved this miniseries version of Kidnapped, as well as Ring of Bright Water. For a modern-day children’s series set in Scotland, see #7 of this post. I’d love to hear some of your favourite Scottish stories and books in the comments below!

Want a literary trip to Ireland next? Check out these 6 Classic Books Set in Ireland! And see this post for 12 books to inspire wanderlust around the world!

For more novels with a Scottish setting, I recommend you check out the romantic suspense novels of Mary Stewart. Stewart lived in Scotland and loved the country deeply, and set some of her books there including Wildfire at Midnight and Stormy Petrel.