Visit Ireland through the pages of a book! These classic books set in Ireland will give you a taste of Irish culture, history, and landscape. I’ve included both Irish novels and short story collections in this sampling of classic Irish fiction.

I know a lot more about English and Scottish literature than I do about Irish literature. It’s a gap I want to fill in. When you look at the classics, there are plenty of standout books written by Irish authors such as Jonathan Swift, Oscar Wilde, and C. S. Lewis. But oddly, for all the great Irish novelists not many of them set their stories in their native land, in spite of their love of country. So I set out to find some classics that are not only written by Irish authors but are also set in Ireland and feature Irish protagonists and Irish interests.

These six Irish literature picks were written over the course of almost two centuries, and dip into Irish history from the 1600s to the 1920s. You’ll find a range of genres and styles, from social satire to ghost story to historical romance. Every one of these books will colour out your picture of the Emerald Isle a bit more. Read one to celebrate St. Patrick’s Day, before traveling to Ireland, or just because they’re worthwhile.

Ireland awaits you through the portals of these classic Irish novels and short stories. Enjoy your trip!

A decade before Jane Austen published her first novel, Anglo-Irish writer Maria Edgeworth made her literary debut with Castle Rackrent in 1800. Like Austen’s novels, Castle Rackrent is a regional, localized novel and a satire of the landed gentry. It’s an interesting book because it’s one of the first historical novels, the first family saga novel, and it features an early example of an unreliable narrator.

The story follows the fortunes and tragedies of four generations of Rackrent heirs, as recounted by their steward, Thady Quirk. Despite the long timeline, the novel itself is short–just shy of 100 pages. So you can take a quick trip to 1700s Ireland and be back in your normal genre in time for tea!

The Wild Irish Girl is an epistolary novel that quickly reached bestseller status after its publication in 1806. In the story, Horatio, an English aristocrat and “bad boy,” is banished to his father’s estate in Ireland to mend his ways. Once there, Horatio falls under the charm of the land–and under the charm of the erstwhile princess Glorvina. Unfortunately, Horatio discovers that his own ancestors are responsible for the demise of Glorvina’s family. His solution? Pose as a poor artist so Glorvina’s family won’t hate him.

If you don’t mind a good melodramatic novel and plenty of digressions about Irish history and culture, give this Irish romance a whirl. The book sparked a keen interest in Ireland back in its day, and it might do the same for you!

If you’re in the mood for ghost stories and folklore, pick up a copy of these masterful tales by Le Fanu, Victorian purveyor of Gothic fiction and horror. Le Fanu’s work impressed and influenced fellow Irishman Bram Stoker, as well as M. R. James, and later Dorothy Sayers. This collection of his early work is gleaned from magazines Le Fanu contributed to, such as the Dublin University Magazine and All the Year Round. Perfect for bedtime reading when the wind is howling outside!

Note: If you have trouble getting this book, check Project Gutenberg to read electronic versions of many of Le Fanu’s short stories and novels.

Joyce’s famous collection includes fifteen Irish short stories about ordinary Irish people living in Dublin in the early 1900s, from all seasons of life and every social strata. In each story, Joyce employs one of his signature literary devices–the “Joycean epiphany”–where the central character has a sudden realization that changes their view of the world or of themselves.

Some readers shy away from Joyce based on the reputation of his experimental novels Ulysses and Finnegan’s Wake, but Dubliners is actually quite accessible and easy to read. Because of the range of characters you meet and their varied outlooks on life, this collection would make a good pick for your book club to discuss!

The Last September by Elizabeth Bowen

It’s 1920 in Cork, Ireland. In the wake of World War I, Ireland is enmeshed in its own war for independence. The wealthy Naylor family attempts to insulate themselves with parties, tennis matches, and society visits. But eighteen-year-old Lois is full of dawning questions about the world and her place in it, complicated by her relationship with a British officer.

Although Elizabeth Bowen is best known for her London-centered wartime stories, she said that The Last September was nearest to her heart. It’s a novel of her homeland, drawing on her own experiences and impressions of a country on the cusp of change.

Published in 1959, Macken’s novel is Irish historical fiction set during Oliver Cromwell’s invasion of Ireland, from 1649-1653. After their village is massacred, the MacMahon family flee to the western wilds seeking a new life. Heartbreaking but beautiful, brutal yet inspiring, this is the book to read if you’re in the mood for an epic adventure.

Seek the Fair Land is part of Macken’s Irish historical fiction trilogy, and is followed by The Silent People and The Scorching Wind.

Have you been to any of the places featured in these Irish novels and short stories? What are your favourite books set in Ireland?

If you liked this post, check out these 6 books that will transport you to Scotland, and these 12 books to inspire wanderlust. And here’s a few books near and dear to my heart that made me fall in love with British literature. 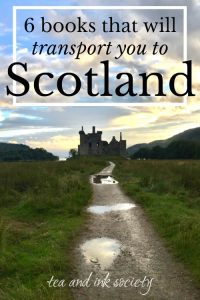