These terrible Anne of Green Gables book covers absolutely do not capture the soul of L. M. Montgomery’s novels. But they are hilarious. Enjoy a good laugh!

It’s time for another round of bad book covers! I found so many that I couldn’t include them all in my first bad book covers post. Apparently, there’s a plethora of people who try to cash in on the popularity of classic novels–and the fact that these classics are in the public domain–by slapping together their own edition with a cheesy cover.

Rest assured, I love Montgomery’s novels, and thus these terrible covers are practically a crime. But they’re funny too because they are so far off the mark. See what I mean…

Let’s start with this now-notorious version of Anne, featuring a GIRL WITH BLONDE HAIR:

This cover got some intense coverage in the media and drew both scathing and hilarious comments from outraged fans. (Seriously! Google “blond anne of green gables” or look up the hashtag #BlondAnne on Twitter!)

Thankfully, book designers usually get the hair color right, but this one left out something else important…

Because apparently the sultry, come-hither Anne is a recurring theme.

At least this turtleneck-clad Anne Shirley is more chaste:

As Marilla says to Anne “you look so tall and stylish and so–so–different altogether in that dress–as if you didn’t belong in Avonlea at all.” How right you are, Marilla.

If you’re hard to please when it comes to Anne depictions, maybe this is the edition for you:

You can take your pick between the red-headed options!

And then there’s the “Anne with an Attitude” editions, like this…

…And this unfortunate set from Puffin Classics:

If Mark Twain had read this version of Anne, I doubt he would’ve called her “the dearest and most lovable child in fiction since the immortal Alice.”

This isn’t the first time Puffin has come up with an odd Anne cover, though. You’ve got this, which is sort of an optical illusion. Is Anne wearing a pompadour, or isn’t she?

Then there’s this, which might just give you nightmares:

And this, which mirrors my own expression when it comes to Puffin’s cover fails:

Can you spot the subtle pun in this next cover?

You see, that’s Queen Anne of England. And England is also an island. Is your mind blown yet? Anne’s friend Philippa calls her by the nickname Queen Anne, and even comments on her fashion choices: “Bolingbroke would go wild over you, Queen Anne—your hair and your style and, oh, everything! You’re so DIFFERENT. You’d be such a success—and I would bask in reflected glory.” I’m sure this is how Anne struts about Redmond College, right? No wonder Roy[al] Gardner fell for her!

Take a look at this cover, in which the designer repurposed the famous ridgepole-walking scene for the novel about Anne’s early married life: 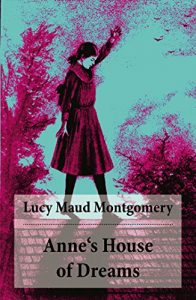 Didn’t Anne say she never makes the same mistakes twice? The cover designer must be mixing up traditions here–you get carried over the threshold of your new house. You do not walk its ridgepole. This is always a bad idea.

Fast forward a few years in Anne’s married life, and we get this:

In which Anne dies her tresses raven black (successfully this time), and she and a smiling Gilbert abandon decorum in favor of simple cotton t-shirts for the whole family.

The last official book in the Anne series, World War I era Rilla of Ingleside has some widely varying interpretations, too:

Perhaps these are more Kevin Sullivan fanfiction, à la The Continuing Story–one in which Rilla runs away as a war nurse, and the other in which she sings at the White Sands Hotel, wearing a dress that would’ve made her namesake think favorably of puffed sleeves after all.

Montgomery’s other novels haven’t suffered as many injustices as the Anne series, but there are a few standouts:

No, that’s not right, either. How about this:

Most covers of L. M. Montgomery’s novels feature women, so you’ll appreciate this fresh take on The Blue Castle:

I suppose that’s supposed to be Barney Snaith? But this doesn’t look like a suitable outfit for sliding under cars and tinkering in motor oil. Ah well, “Whatever he was, he was an individual that could not be ignored.”

And this one, just…what the heck?

I have no words!

With that, we shall draw a veil over further indignities. Thankfully, there are some truly lovely Anne of Green Gables editions, which I’ll be sharing in a later post(: