If books could get Oscars, these 10 from my reading list last year would win an award! These are the best literary heroes, heroines, villains, and more!

It’s my custom each year to reflect on the books I’ve read the previous twelve months. Doing so gives me a chance to remember what I loved about them and how they changed me. It also provides direction for my reading choices the following year; sometimes I want to find more of the same, and sometimes I’m reminded to mix things up! It’s easy to recall what I’ve read because I note every title and author in my Reading Record, as well as the month I finished the book.

To highlight memorable books and characters I encountered in my reading last year, I thought it would be fun to give them “awards,” Oscar style. Please note that these are not books that were published in 2016, but ones I personally read in 2016.

A few years ago it would’ve been difficult for me to make any “Oscars” list since I had read so few books as contestants. But I’ve been ardently rediscovering the joy of bookworming, and even though I’m a mom now I’m reading more than ever! This made it difficult to pick winners from my 2016 reading list, but I’ve put myself through the ordeal in order to present you with…

I’d like to give this to Rilla Blythe of Rilla of Ingleside by L. M. Montgomery. Her mother Anne probably deserves it more, but this was the first year I’d read Rilla of Ingleside, and I was smitten by the title character. As all excellent heroines do, Rilla displays real growth over the course of the novel, and Montgomery is a master at weaving in this character development in a natural way.

Hazel from Watership Down is a noble hero who deserves this title for so many reasons. Yes, he’s a rabbit, but that makes him no less heroic. In this epic dystopian novel by Richard Adams, Hazel steps into a leadership role when his warren is destroyed by humans. He leads a straggling band of rabbits on a perilous journey to find a new home, and in the process becomes a wise, resourceful, and diplomatic Chief Rabbit.

I’m giving this award to Rubidius from The Gateway Chronicles by K. B. Hoyle. When I first met Rubidius in The Six, I thought he seemed a little too familiar. I couldn’t help but wonder if K. B. Hoyle was inadvertently copying a character from some other book! But she’s not. The alchemist is familiar because he’s so carefully imagined. Rubidius is believable, which makes the magic he does believable, which makes the whole magical world of the series believable, too. And that’s an absolute must when you’re reading a fantasy series!

This award goes to the villain in Gone Girl by Gillian Flynn. Unfortunately, I can’t tell you who it is because that would spoil some of the novel, in case you ever read it! But trust me, they are evil. I found Gone Girl to be a gripping, cleverly-written thriller, and Flynn is a skilled author. However, this novel is pretty dark at points (I’ve heard her other books are, too), and I’m not sure I’ll read anything else by her. Her villain is perfectly villainous, though.

This award can’t go to anything but The Great Gatsby by F. Scott Fitzgerald, which I finally read for the first time last summer. I loved everything about this book, but the charged dialogue between characters is what really made the pages fly for me. We don’t often see so much action in dialogue as we do in The Great Gatsby. I felt that the pulse of the story beat fastest when the characters were talking, and I found this absolutely enthralling.

Little Women by Lousia May Alcott wins this award on account of Jo and Professor Bhaer, although I love the romances of Meg and Amy, too! Perhaps what I love best about Jo’s love story is that it’s so closely tied to her journey of self discovery and her maturing as a woman. Alcott convincingly shows us that Jo and Laurie aren’t a good match, and that’s pretty impressive considering the clamor she had from fans to pair them up after she wrote the first volume! Professor Bhaer is the one whom Jo needs, and if we understand that we understand Jo.

I read a lot of old books, but every year a variety of recently-written books do make it onto my list. Last year my favourite contemporary read was Ready Player One by Ernest Cline. My husband had been egging me on to read this for months. Since I’ve learned to trust his judgement I packed it on our summer vacation–and flew through the pages in mere days! This science fiction novel feels like National Treasure in a video game (except it’s geeky, not patriotic). The story is highly imaginative, with three-dimensional characters and a tightly-paced plot.

This award goes to Anne of Avonlea by L. M. Montgomery, although that decision is fluid, based on the day you ask me! I love the entire Anne of Green Gables series, but I vacillate in choosing a favourite novel–Anne’s House of Dreams and Anne of Ingleside sometimes claim that title, too. But since I loved Anne of Avonlea longest (it was a re-read from my childhood), it gets the official title here on the blog.

Home Education by Charlotte Mason claims this prize, although The House That Cleans Itself by Mindy Starns Clark is a runnerup. Charlotte Mason published Home Education in 1886 to explain some of her teaching and parenting philosophies which had become popular throughout England. I found Mason’s old-fashioned advice to be highly relevant and challenging to today’s society. You can read my post on Richly Rooted about how this book has informed my own simple, intentional approach to parenting.

What amazing books did you read last year? What awards would you like to give out?

Check out more Tea and Ink Society book Oscars in these posts: 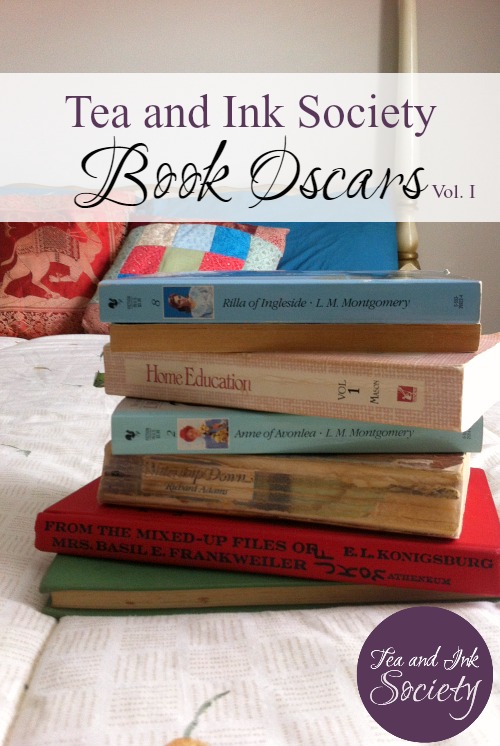