These classic Gothic novels will send a delicious chill up your spine! Get ready for secret passages, dark plots, rapacious villains, and Gothic fiction at its best, from Ann Radcliffe to Wilkie Collins to Louisa May Alcott. 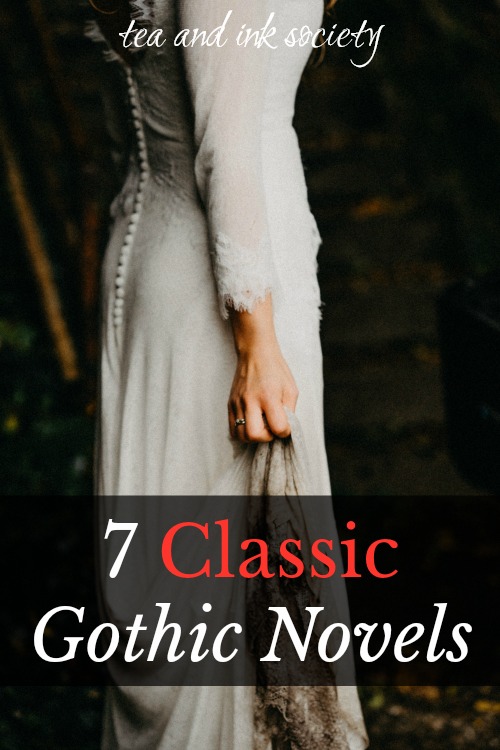 My sixteenth year was the one I discovered Gothic novels. I was living in Chile with my family, and books in English weren’t as plentiful as I would’ve liked. When we discovered the book library at the American Association, I felt like I’d struck it rich.

Well, someone who donated books to that library must’ve loved Gothic fiction, for it was there that I stumbled upon such classics as The Woman in White, Wuthering Heights, and The Phantom of the Opera. I hauled my treasures home and as was my practice, saved them to read on days that matched their mood. For Gothic novels, that means grey, gloomy days or dark and stormy nights.

It didn’t take me long to become familiar with all the trademarks of the Gothic genre: moldering castles, trapdoors, ghostly sightings, wild scenery, isolated heroes and heroines, ancestral secrets…the lot. Since those early forays into Gothic fiction I’ve read some weird ones, many that lie on the edges of the genre, and one that’s just plain trash. (Well, I didn’t finish that last one!)

I love classic Gothic romances, and they’re particularly satisfying to read this time of year. Check out one of these novels to read on a cold and windy night in late autumn or winter. Snuggle up with tea and blankets–these stories may send a chill up your spine, and when they do, a little extra comfort will be quite welcome(:

The Castle of Otranto by Horace Walpole

This Gothic novel is short, so you really could tackle most of it on just one cozy night! It’s also an important one to read, as it’s counted the very first Gothic novel, written in 1764. It tells the story of Manfred and his machinations to control his family line and thwart an ancient prophecy.

Forget what you think you know about this genre-spawning classic. The original Dracula is firmly Victorian with one of the best, most epic good-versus-evil narratives you’ll ever read. You get a dose of the nightmarish castle of Count Dracula before the plot moves to London. A small band of intrepid heroes, led by Dr. Van Helsing, fight to overcome the spreading evil. It’s a fast-paced story, wonderfully dramatic and deliciously creepy. I would especially recommend this book to anyone who loves Victorian literature–it’s a great way to expand your knowledge of the genre.

The Fisherman’s Lady by George MacDonald

This book takes place on the rugged Scottish coast and follows the story of Malcolm MacPhail, a fisherman. I was expecting a romance when I picked this up, but didn’t know it would be a good Gothic tale to boot! There’s family secrets to discover, hidden stairways, crumbling castles, and thugs who abduct people. And because it’s George MacDonald, you also get shots of spiritual insight that make this more than just an entertaining read. Note: The sequel to this is The Marquis’ Secret.

Related: If you love books set in Scotland, here are 6 more picks to check out!

The Mysteries of Udolpho by Ann Radcliffe

Thanks to the world’s undying love for Jane Austen, many people have heard of The Mysteries of Udolpho. Austen satirizes it (lovingly, I believe) in Northanger Abbey. But not many people have actually read it. Perhaps because it’s long and packed with descriptions of scenery that it make feel more like a travel narrative. Personally, I don’t mind if the masses pass it up. That way, this unusual and dreamlike book can remain a hidden treasure.

The Woman in White by Wilkie Collins

A classic in the Victorian Gothic genre, this “sensation” novel was the Harry Potter of its day…with lines out the door when each weekly segment appeared in All the Year Round. The story is certainly sensational–with nefarious plots, family secrets, insanity, and all that–but it’s also extremely well written. Collins was an eloquent writer, and his use of multiple narrators (including the villain) make it a compelling read.

A Long, Fatal Love Chase by Louisa May Alcott

Remember how Jo had a penchant for dark, melodramatic potboilers before she decided to write her family’s story instead? Well, so did Louisa May Alcott. She wrote A Long, Fatal Love Chase two years before Little Women, although the novel wasn’t published until 1995. The heroine, Rosamond Vivian, lives on a lonely island with her grandfather but longs for love and freedom. She thinks she finds both in Philip Tempest. But with a last name like that, how can she? Tempest becomes her stalker, and Rosamond is forced to adopt a series of disguises as she flees from country to country. The story is a far cry from Little Women, but it’s so much fun to read!

The Italian by Ann Radcliffe

Shorter and more tightly paced than The Mysteries of Udolpho, The Italian still delivers the rich texture and romantic settings of Radcliffe’s earlier novel. The villain, Father Schedoni, is especially memorable. The “Italian” of the title, he takes confessions in the church but also acts as assassin and kidnapper. I’ve always thought this book would make an excellent stage or screenplay.

Have you read any Gothic novels? If so, which ones do you like best?